Let me go ahead and start off with the obligatory "I don't have much to say tonight."

I've been working quite a bit for the last few weeks; I've even managed to get some overtime, which is not always easy to come by in this day and age.  I was off last weekend and am off this weekend, which is nice.  I think last weekend was only the second full weekend I've had off all year.  It's frustrating to be working so much and so hard, and to still feel like you are living paycheck to paycheck.  But I guess that's just life in 21st century America.

We went to the lake last weekend with the whole clan - my wife's parents and her sister's family of 7.  We were able to get out on the boat on Saturday morning and do a bit of fishing with the kids.  As per the norm, my brother-in-law caught a fish, and I caught jack shit.

My wife and I always enjoy watching 48 Hours Mystery on Saturday nights and 10 pm, and we watched a new one tonight that has kind of got me creeped out.  I normally don't get that way, but this one was just particularly unnerving.  The murderer is apparently a serial killer - off the streets now and awaiting trial - but he has killed at least four women, the earliest being when he and his victim were just teenagers.  The disturbing thing about this guy is that he doesn't appear to have been motivated by sex or rape or theft or even something like revenge.  His victims have apparently shown no signs of sexual assault, and money and credit cards have never been stolen.  Instead, he apparently just likes stalking, then murdering and mutilating women with a knife, Jack the Ripper style.  It's a total nightmare scenario: he sneaks in through a window and starts stabbing the woman while she is asleep in bed.  One managed to fight him off, and he actually mumbled "sorry" as he fled out the door.  It was after that botched attack in 2008 that he was finally arrested.

In any case, I've been a little paranoid since watching that episode tonight.  Earlier, I went upstairs to do something, and as I came around the corner in the stairwell, there was a shadow thrown against the wall because the light was on upstairs and the door into the Cave was partially opened.  At first glance, I thought it was a person standing there, and my heart rate went from about 80 to 150 in roughly 0.6 seconds.

Just finished the second installment of Sharon Kay Penman's 12th century historical trilogy about Henry II and his queen, Eleanor of Aquitaine.  This book was centered on Henry's friendship, and ultimate falling out, with Thomas Becket, who was originally Henry's chancellor, and later became the Archbishop of Canterbury (even though he hadn't even been a priest prior to his elevation to that most powerful Church position).  Becket was eventually murdered right near the altar in Canterbury Cathedral by knights loyal to Henry, having come ostensibly to arrest Becket.  This is one of the most famous stories of Medieval England, and I find it utterly fascinating.

Before I read the last book in the trilogy - which will center on the last years of Henry's life, and the rebellion against him by his sons - I am reading a book I recently bought called Swan Song.  This is by a writer named Robert McCammon, who isn't widely known, but who has apparently written quite a few novels, some of which have been New York Times bestsellers.  I read one book by him several years back, on the advice of my sister, and it was absolutely one of the best books I've ever read.  It was called The Wolf's Hour, and I highly recommend it.  In a nutshell, it's about a werewolf who works as a spy for England in World War II.  I know, I know - it sounds bizarre.  I thought the same thing when my sister first lent me the book, and it sat on my bookshelf for probably two years, until I finally started it one night when I had nothing else to read.  It was absolutely fabulous.  Definitely a "read again" kind of book.

In any case, this new book I'm starting is called Swan Song and it's an absolute monster.  I haven't actually looked to see how many pages it is, but it must be well in excess of 1000.  It was originally published in 1987, so it's not a new book, but it has apparently just been re-released.  It's in the same genre with Stephen King's popular book The Stand.  It's one of those "terrifying visions of a post-apocalypse world," where a nuclear World War III occurs and more or less wipes out civilization as we know it.  This is already occurring right in the first chapter, and the book itself will be about what happens afterward.  I read The Stand last year and thought it was decent - I rarely ever think Stephen King books are anything other than "decent" - so I'm curious how this one will compare.  If it's anything like The Wolf's Hour, it should blow The Stand completely out of the water.

Not much else to report.  We've been seeing a lot of horses in our backyard lately.  I think I've probably mentioned around here before that our new house backs right up into a horse farm, and our house is actually the only one on the street with an unobstructed view into the fields - all the other houses are blocked by trees.  For some reason, there is a big gap in the tree line right behind our house, so the horses literally come right up to the fence in our backyard.  We've been feeding them grass and apples and carrots out of our hands, although I wonder if the owners wouldn't be irritated with us for doing that.  Two of the horses are some kind of really large breed - Clydesdales maybe?  I don't know much about horse breeds, but these two horses are all white and must be the biggest horses I've ever seen.  They make the "normal" horses seem rather small. 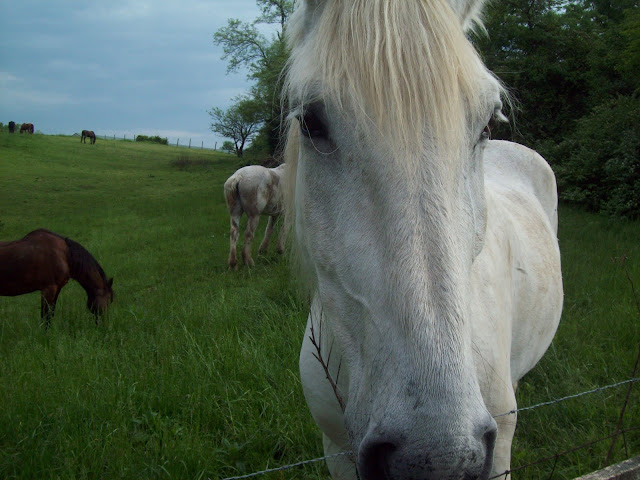 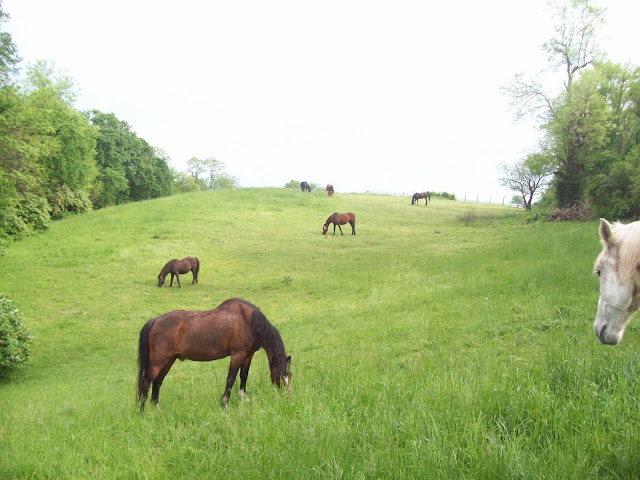 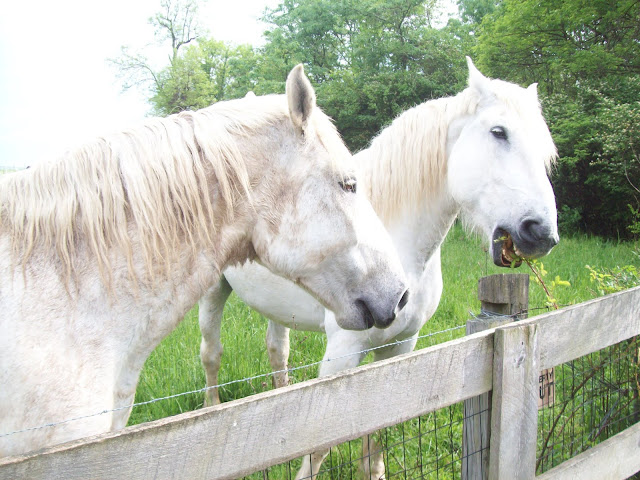 A Musing By Scott at 1:22 AM No comments: Links to this post

This fellow is the U.S. congressman for my district in Kentucky.  He's not anyone you've ever heard of, of course, but most congress people are not prominent enough to get national media attention, unless they commit a crime.

From everything I know about him, he's a pretty strong conservative, and if you know anything about me, you'll know I'm a lifelong Democrat.  Be that as it may, I get his weekly email newsletter to keep up with what he's doing in office.

The thing that strikes me every week about this newsletter is that it is unashamedly partisan.  The newsletter is sent out under the guise of "informing" constituents about what's going on in Washington, but the entire thing is just a set of Republican talking points and criticisms of the Obama administration.  Now this, by itself, isn't so surprising.  I'm sure Democratic congressmen have similar newsletters, probably just as unashamedly biased.

What really bugs me, though, is that every couple of weeks, he will include a link to a "survey" that he has "put together" to "find out what his constituents think" about a given topic.  These surveys always make for a good laugh.  Take this week's survey for instance.  The first question is this: "How have you been affected by rising gas prices?"  It then lists several answers, and you can click as many as are applicable to you.  Okay, fair enough.

The second question is this: What do you think of the Obama Administration's energy policy?

Here, there are only two answers possible, and you have to choose one or the other (there are also "unsure" and "other," but I'm not counting those).

The first answer is this: I agree with the current policy.  Increasing regulation and taxes on energy companies will protect the environment and fight global warming, which is necessary even if it raises gas prices.

The second answer is this: America needs a new energy policy that will encourage more domestic production of energy to lower the cost of fuel and create more American jobs.

Hmmmmmm.  Which answer do you think is going to get the vast majority of votes?  It's a tough one, I know, but it's answer number two.  Who, after all, is going to say they want "regulation" and "higher taxes" and will gladly suffer through "higher gas prices"?  With the obligatory reference to to the divisive issue of global warming, the entire answer is worded in such a way as to ensure that no self-respecting Republican, and very few Democrats, are going to choose it.

The second answer, on the other hand, is spun out to sound totally reasonable, with its reference to "America" and "new energy policy" and "domestic" and "lower fuel costs" and "American jobs."

In other words, Obama is all about taxes and regulation and evil global warming and high gas, while the valiant Republicans are all about America and domestic prosperity and low fuel costs and more jobs.

Why does ANYONE take this shit seriously?   I didn't even respond to the survey because it was such an obvious sham.  Geoff Davis does not have one iota of interest in what his "constituents" actually think.

But that's how this game works.  Will it surprise anyone when Geoff Davis gets up on the floor of the House, or gets on an  interview with a reporter, and says that his constituents have "told him" that they want "a new energy policy" and that they disagree with Obama's policy?   And he can just conveniently point to his little survey to "prove" that.

What a sham.  And what a sham for a politician Geoff Davis is.
A Musing By Scott at 10:33 PM 4 comments: Links to this post