It's been a bad year for blogging.  I'm not sure why my productivity in this regard has slacked off so much.  Perhaps it's because I've been working on novels again this year, and that's taken the place that used to be used by blogging.  If so, then it's not such a bad thing that I haven't blogged as much.

In any case, this edition of NFTC is coming to you from the dining room, where my computer has been camped out for the last month or so.  It's a little more cramped in here than normal, as we are storing some Pottery Barn furniture that my parents have bought for their new house (which won't be finished until March).  We wouldn't have Pottery Barn furniture in our house otherwise, that's for damn sure.  We prefer cheap and hand-me-down.  Okay, we don't actually prefer that, but she's a teacher and I'm an X-ray tech. 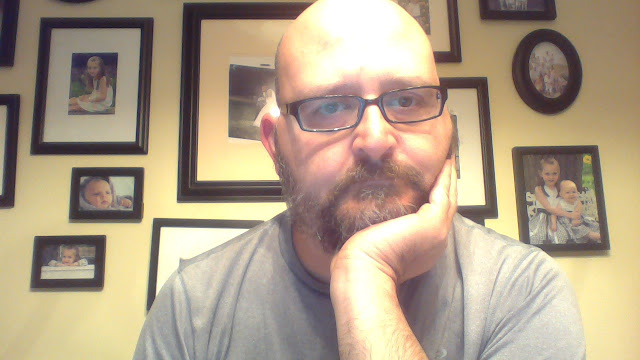 As you can see from this picture I just took of myself in the dining room, I'm doing No-Shave-November.  For me, that means also doing No-Shave-September-and-October.  I can grow facial hair, unlike my sad, pathetic friend Mike, but it grows very slowly.  So this year, I decided to start early on not shaving, so I could have a manbeard by November.  Some have described my beard as a dead muskrat, but I'm still proud of him.  My beard's name is James, I prefer for you to call him by his first name.  Thanks.

If you're wondering, he's named after my beard hero, James Garfield, the 20th president of the United States. 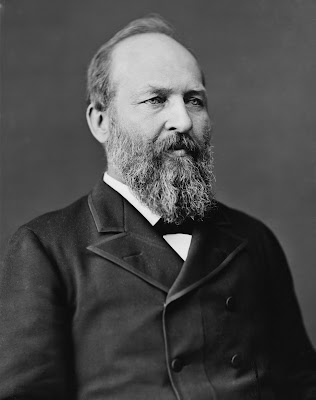 Maybe one day, I'll have a beard like this guy. Hopefully, I won't get shot by an assassin, like he did.

It wouldn't be Notes from the Cave if I didn't make a political statement, and I have to say that I am super bummed by Jack Conway's decisive loss in the Kentucky governor's election.  The polls had him leading throughout the entire campaign, including a 5% lead in the last poll before the election. This is actually the second election year in a row (last year's involved Mitch McConnell's re-election to the Senate) in which the Kentucky polls have been totally wrong.  I'm not sure who is in charge of conducting polls in Kentucky, but they aren't doing a very good job.  Matt Bevin, a tea party right winger who has vowed to undo everything his Democratic predecessor did, won by 9 percentage points.  That's a swing of 14 percentage points from what the polls said.  Bevin ended up with almost 53% of the total vote; the final poll had showed him earning 40%.  Unbelievable that a professional political poll could be that off the mark in the 21st century.

In any case, I hope his term as governor isn't as awful as I fear it will be.  The last Republican governor Kentucky had (we'd only had one since the early 70s prior to Bevin being elected) had a term plagued by minor scandals and he lost his re-election bid four years later (to the guy who just left office).  Of course, that guy (Ernie Fletcher was his name) wasn't a far right winger like Matt Bevin is.  I fear Kentucky is going to get exactly what it voted for.

Well, enough of that.  I'm really excited about the start of cold weather this year (amazing, I know) because all my favorite winter beers are starting to come out, particularly my beloved porters, which you can hardly find in the summer.  I'm drinking a Leinenkugel's Snowdrift Vanilla Porter as I type.  I recently had another called Diesel Punk that was pretty good (and nicely priced, for a craft beer, as well), and then there's my favorite, the porter made by my local Cincinnati brewery Rhinegeist, called Panther.  In a past life, I clearly worked as a porter (someone who carries stuff for people) in 18th century London (which is where this type of ale was invented; it was named after the porters working the London dockyards, who had a particular affinity for it).

I know I've been promising it all year, but I'm going to be publishing some novels pretty soon on Amazon.  One is a thriller set in modern day Australia, and the other is a historical thriller set in 1920s Europe.

Very glad that college basketball is finally under way again.  Kentucky has easily won its first two games against small programs.  The first big test will be this Tuesday against Duke, who is ranked 5th.  Kentucky is ranked 2nd to start the season.  Like other years, they have a bunch of highly-rated new players, but unlike some other years, they also have a fair amount of upperclassmen.  This could definitely be a championship-caliber team.  I have to qualify all this, however, by admitting that last March, after Kentucky's devastating and soul-crushing loss in the Final Four to ruin a perfect season, I swore I wasn't going to get as emotionally attached this year.  And I'm not.  I didn't even watch the first two games, although I have to admit that was only because I had to work.

What else?  I'm currently reading two very long books: a 600-page nonfiction book called The Fall of the Roman Empire, by a British historian named Peter Heather (which is partly for enjoyment and partly for research for a novel I plan to write in the future), and a 1200-page novel called Carrion Comfort by Dan Simmons, about "mind vampires" - people who can occupy other people's minds and force them to kill.  I'm enjoying both immensely.

I currently have 40, yes 40, books on my Amazon wish list.  Just in case you want to get me a gift card.

Construction has finally gotten started on the house my parents are building in Hebron.  Pretty excited about them moving up here.  Dad already retired and Mom retires December 30.  They have to be out of their house down there at the end of November, so they'll be staying in a hotel through December.  They leave New Year's Eve for England, where they will stay for 3 weeks.  They then return to Houston, get in their car, and drive up here, where they will go between my aunt and uncle's house in western Kentucky, my aunt and uncle's house in Indianapolis, and us, until their house is finished in March.  Their stuff will be in storage in Houston until they move. 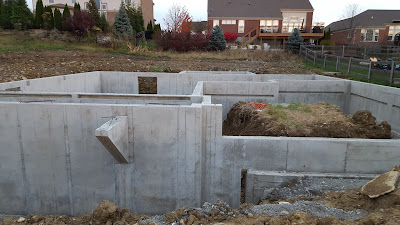 Hopefully they've delivered the wood by now and will be starting soon on the actual structure.  I know none of you really care about this, but it's my blog, so.

Okay, I guess that's enough for now.  Merry Christmas if I don't blog again before then.  And I probably won't.