Have you heard about this Oscar Pistorius murder case?

In case you haven't, Pistorius is a Paralympic athlete who made international headlines this summer when he competed in the regular Olympics alongside able-bodied runners.  He didn't medal, but he did make the semi-finals, which is pretty remarkable considering he's a double amputee with no legs below his knees. 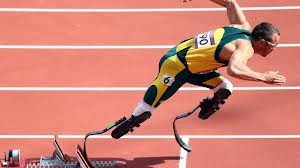 Anyway, he's from South Africa and has been described as the most famous athlete in the country.  On Valentine's Day, he shot his girlfriend while she was locked inside the bathroom in their house, and was subsequently arrested and charged with murder.

The police have said that Pistorius and his girlfriend got into a fight in the middle of the night, she went and locked herself in the bathroom, he then put on his prosthetic legs, got his gun, and went to the door and fired four shots, three of which hit and killed her.  How do they know the couple was fighting?  Several witnesses said they heard the sounds of an argument, saw the lights on in the bedroom, then heard the gunshots and a woman's scream.

Pistorius, however, claims that he shot her on accident because he thought she was an intruder.  He says they were both in bed sleeping and there never was any argument.  He says, instead, that he woke up in the middle of the night and went to the balcony of the bedroom to bring a fan inside and to shut the door (which had evidently been left open to the night air).

When he came back into the bedroom, he heard someone in the bathroom and jumped to the immediate conclusion that it was an intruder.  He said workmen had been working on the house and had left their ladders outside, so he feared someone had climbed into the bathroom that way.

At this point, he fired shots at the door and screamed again for his girlfriend to call the police.  When she didn't respond, he went back into the bedroom to wake her up.  The lights were still off.  When he realized she wasn't in bed, it "dawned on" him that it might have been her in the bathroom.  Finding the bathroom door locked, he knocked it open with a cricket bat and found his girlfriend slumped over the toilet, dying from her wounds.

He has stated that he now believes his girlfriend got up and went into the bathroom while he was outside getting the fan on the balcony.  At the time, he says, he did not realize she wasn't still in the bed, and he points to the fact that the lights were off in the room to back this claim up.

So far, the information in the news is focusing on "inconsistencies" in what the police investigators have been saying about their investigation.  The media, as a whole, seems to be on the side of Pistorius.

To begin with, Pistorius said himself that he kept his gun by his bed, and that's where he went to retrieve it after realizing someone was in the bathroom.  The investigators found the empty holster lying beneath the left side of the bed - which is undeniably the side Pistorius's girlfriend was sleeping on.  How in the world could Pistorius have gone to her side of the bed to retrieve his gun and not have realized the bed was empty?

Secondly, Pistorius claims that he was filled with terror and paranoia during this event because he did not have his prosthetic legs on and felt vulnerable.  I can totally understand that, especially considering that South Africa has one of the highest murder rates, and overall crime rates, in the world.  Pistorius, however, lives in a gated community in an upscale area of Pretoria, South Africa, and obviously felt secure enough to not worry about leaving windows, and even balcony doors, open during the night.

As such, why would a reasonable person wake up in the middle of the night, hear someone in the bathroom, and immediately conclude it was an intruder, rather than a member of the household?

Even if you did make that assumption, wouldn't you make damned sure you were right before you just started shooting at a shut door?  Would you just start shooting in a wild panic, without actually knowing who was inside, or would you maybe call out first and tell them something like: "Hey, you in there, I've got a gun and I'm going to shoot you if you don't get out!"?  Furthermore, wouldn't you maybe go over to the bed and see if your girlfriend was lying there before assuming an intruder was in the bathroom?  It just doesn't add up.

I realize it's hard to say with any certainty how a given individual might react in such a situation, but I don't fully understand why a reasonable person would just start shooting at a closed door.  Pistorius did claim, of course, to call out to the person, but he said he did this while he was still in the bedroom, and he said only that he screamed for them to "get out" of his house.  Not everyone (especially in America) thinks there's anything wrong with killing a home invader, but wouldn't a reasonable person at least tell the supposed invader they were going to start shooting, especially if they hadn't even actually seen the invader yet?

Finally, the fact that Pistorius's girlfriend locked the door is a significant clue, in my opinion.  Who gets up in the middle of the night to go pee and shuts and locks the bathroom door behind them?  The fact that she had locked herself in the bathroom is an indication, in my opinion, that she was hiding from Pistorius, probably because he had threatened her following an argument.

Pistorius has responded to this problem by stating that she must have heard him screaming about an intruder, and therefore locked the door in fear.  That's all fine and good, but it raises more questions than it answers.

1. If she heard him screaming about an intruder, why didn't she also hear him telling her to call the police (thus implying he thought she was still in bed)?

2. If she heard him yelling about an intruder and telling the intruder to get out, why didn't it cross her mind that he thought she was the intruder?  Especially after he came into the bathroom?

3. Why didn't she, apparently, make so much as a peep if she believed an intruder was in the house and her boyfriend was in danger?  Clearly she made no sounds because Pistorius would have realized it was her in the bathroom otherwise.  If you thought someone was about to kill you and your boyfriend, wouldn't you be screaming or at least yelling for help?

4. In addition to not making a peep, why didn't she take any apparent steps to help her disabled boyfriend in a confrontation with a potential intruder?  Instead, if what Pistorius said is true, she just locked herself in the bathroom and remained as quiet as a church mouse.  Maybe she was just a cold, selfish bitch, or maybe she was just frozen in terror, but it bears consideration.

Another inconsistency in Pistorius's story is that he claims explicitly that he did not have his prosthetic legs on during this event.  That was, in fact, his justification for becoming so terrorized; he was on his stumps and couldn't flee.  The forensic experts, however, have stated that the height, angle, and trajectory of the shots prove that Pistorius had his prosthetic legs on at the time of the shooting.  He wouldn't have been tall enough, otherwise, to put the bullets through the door at the spots where the holes were found.

And what about those witnesses who saw lights on (which contradicts Pistorius's story of the room being in darkness) and who heard arguing before the gunshots?  Presumably, Pistorius would refute this by simply saying the witnesses were mistaken about when the lights came on, and suggesting that the "argument" overheard was actually just Pistorius screaming at the intruder and telling his girlfriend to call the police.

In the end, this whole sorry story seems rife with problems on both sides of the aisle.  The police investigation has been inconsistent, but Pistorius's claims are also remarkable to the point of being absurd.  If it actually happened the way Pistorius claims, it's a shame he didn't play the lottery that day, because the sheer magnitude of the coincidental nature of this series of events is staggering.  And when it comes down to a situation like this, the old notion of Occam's Razor is a good measuring stick: the simplest answer is usually right.  Clearly, the simplest answer in this situation is that Pistorius killed his girlfriend in a fit of rage.  Otherwise, you have to connect an unbelievable number of coincidental occurrences to explain how it happened by accident.

I think the case will ultimately come down to whether or not the prosecution cam prove Pistorius had his prosthetic limbs on at the time of the shooting.  If he did, he's guilty.  If not, he might still be guilty, but there probably won't be enough evidence to convict him.

If Pistorius is innocent, this event simply underlines the dangers of keeping firearms in your house to protect yourself against intruders - especially if you tend to be paranoid and jumpy.  Sadly, paranoia is undoubtedly a leading reason why people buy guns for protection in the first place.

It's also worth pointing out that even if Pistorius is telling the truth, in my opinion he is still guilty of something like negligent homicide, because he did something remarkably stupid that caused someone else's death.  Who just starts shooting at a locked door without actually knowing who is behind it, without checking to make sure it's not a family member, or without giving a prior warning?  I don't know if South Africa has any laws like that, but it will be a shame, in my opinion, if Pistorius is cleared of all charges.

A Musing By Scott at 11:04 PM No comments: Links to this post