Now that we have gotten moved into our new house, and I finally have a man-cave for the first time in my life, I'm going to start a series called Notes From the Cave.  Of course, for all I know, this may be the only entry in the series, but we'll see.  In any case, these "Cave" posts won't be anything special - just random musings.

My parents drove up from Texas this past weekend with a U-haul load of furniture for our new house - hand-me-downs, mind you, not brand new stuff - and then we had movers come on Monday to move the big pieces from our old place to our new place.  There are still a lot of odds and ends and knick-knacks - most notably most of our hanging clothes - to bring over to the new house, but otherwise we are settling into the new digs.

I've been off the past two days, and am off again tomorrow, so I've had a little bit of time to work on the house, unboxing stuff and setting up furniture.  Unfortunately I had to keep one of my daughters home sick with me today, and will have to keep her home tomorrow too, so that has hampered the amount of work I've been able to get done.  Still, I got the entertainment center put together today, and the long-awaited man-cave is basically done.  I'm sitting at my full and complete desk for the first time in a long time - it's a large, L-shaped writing desk, but the "L" part of it has been in storage for all but a year or two of the last 6 years.  Behind me is the "library" - a series of bookshelves lined with all the books I have hoarded and collected and read over my adulthood.  I'm not sure how many there are, but it's several hundred - they took up about 30 boxes.

There is also a television and a couch, as well as my guitars, which I haven't been able to play much over the last few years since we've been living in an apartment.  The only bad thing about the man-cave is that a portion of it is a play area for the girls, with a bunch of their toys and books and such.  I don't mind sharing it - they need a place to spread out and play outside of their rooms - but that corner would also make a GREAT spot for a La-Z-Boy :)

When I can afford it, I'm going to get a small dorm-sized refrigerator and fill it with beer, and stick at the end of my desk where I can reach it without even having to get out of my chair :)  Getting up to get beer is SUCH a chore.

We like the new neighborhood we are in, but we haven't met any neighbors yet.  The backyard is fenced and backs up to a horse farm.  We haven't seen any horses, but I know they must roam around back there because I can see their calling cards all over the place (that's a nice way of saying there is shit everywhere).  I'm a little bit farther from work now, but only about 5 minutes.

This is me in college playing softball.  It's hard to believe I was ever this skinny. 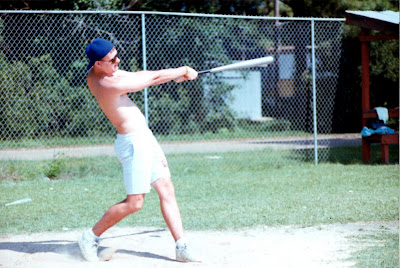 To all my readers: I'm sorry I suck.

I think I'm depressed or something, because I just can't get motivated to write.  I haven't even been reading that much - I've only finished two books so far this year, and they were both short books.  Granted, my wife and I are REALLY busy right now, both of us working full time and simultaneously trying to pack and get moved into a new house, but that's only been going on for the last few weeks - I have no real excuse for before that, other than laziness and lack of interest.  I've tried for the last month to write a new essay on paganism and its influence on Christianity, but it simply will. not. come. out.  I've started it, trashed it, and started it again about five times now.  It's just not there.

The living situation, and general life situation, over the last year or so has really started weighing me down, I think, and even though we are finally moving, I still feel like I am out of sorts.  I think I'll feel better and more motivated in general once we finally get this move over with.  Right now, all the packing and all the actual moving, followed by all the unpacking - all while both of us are working full time - is looming over me like an enormous thunderhead.

I'm also fat now (I didn't used to be), and that doesn't help either.  Being fat sucks big time.  I don't sleep well, I'm tired all the time, my clothes don't fit, I can't move around as easily as I used to be able to, and my general self-image is in tatters.

Let's see...what else can I whine about?  There's a ton of laundry to do, the house is a wreck because we're moving, I've got an upset stomach, and I'm thirsty and there's nothing to drink.

I think I should start smoking again.  I was fat before I quit, but I've gotten even fatter since I quit, and the loss of motivation and interest in things I used to enjoy has only started since I quit smoking (i.e., the lack of motivation to write, losing interest in reading and scholarship, even [gasp!] a strange decrease in my libido).  That's something my quit smoking literature didn't warn me about.  I thought you were supposed to feel BETTER after you quit.  My lungs DO feel better, and I can breathe better now and don't cough constantly, but emotionally I think I feel a lot worse.

Okay fine, I'll stop.  The problem with a personal blog is that sometimes you let people see sides of you that would probably be best kept hidden - like the fact that I'm a hopeless whiner and self-absorbed baby who likes to throw pity parties :)

At least I have a good job and health insurance - two things I haven't always had in the last few years - and we are getting ready to move and get settled into a nice house in a nice neighborhood and finally get out of this hellish apartment  life we've been living for two years.

Throwing Away the Alarm Clock

This is one of those poems I wish I had written.  Charles Bukowski was a big influence on my own little 2-year stint as a poet, and this is probably my favorite of his poems.  Enjoy.

Throwing Away the Alarm Clock


my father always said, "early to bed and
early to rise makes a man healthy, wealthy
and wise."

it was lights out at 8 p.m. in our house
and we were up at dawn to the smell of
coffee, frying bacon and scrambled
eggs.

my father followed this general routine
for a lifetime and died young, broke,
and, I think, not too
wise.

taking note, I rejected his advice and it
became, for me, late to bed and late
to rise.

one of whom
was
myself—someone my father
never
knew.
A Musing By Scott at 11:51 PM 3 comments: