Annie Get Your Gun

Most people who know me well know that I'm an anti-gun guy.

Unfortunately, I live in a country where that puts me in a distinct minority, and that's not likely to change any time soon.  I accept that.

I've been wanting to write about guns for a long time, but have wanted to add something different and unique to the discussion about gun laws, gun rights, gun control, etc.  After all, if you just want to read a hard-hitting anti-gun rant, there are plenty of sources you can find besides Serene Musings.

So I thought a simple review of the facts might be instructional for both pro- and anti-gun people.  Of course I'm going to put my own perspective into it, but regardless of your own position, what follows are well-attested facts from reputable sources.


The United States has more guns per capita than any nation on earth.


The United States has more than twice as many guns per capita than all but three nations on earth (Serbia, Yemen, and Switzerland).

The United States has the highest firearm-related death rate among all First World, developed, and industrialized nations on earth.

Among all nations where data is available, the U.S. ranks about 13th in total firearm-related deaths each year, with roughly 10.5 deaths per 100,000 each year.  The twelve countries ahead of the U.S. are all developing, largely Third World nations like Honduras, Venezuela, Columbia, Jamaica, and Guatemala.  Indeed, the only countries in the top 15, besides the U.S., that aren't in Central or South America, are South Africa and Swaziland in Africa, and Montenegro in central Europe.

If you count only homicides (and not suicides or accidental deaths), the U.S. drops just two places from 13th to 15th.

The United States has the third highest firearm-related suicide rate on earth.

Only Uruguay and El Salvador have higher firearm-related suicide rates than the U.S.

Among First World, developed, and industrialized nations, only Luxembourg has a higher rate of accidental gun deaths.

Overall, the United States is 17th on this list, but among industrialized nations, only Luxembourg has a higher rate of accidental gun deaths.

The only two industrialized nations in the top 10 for gun ownership rates also have the two highest percentages of gun homicides.

The main difference between the two countries is that Switzerland's gun-related murder rate is only about 0.8 per 100,000, compared to the U.S. with 3.2 per 100,000 (roughly 4 times higher than Switzerland).

A 2013 study published with the National Institutes of Health found that, among 27 developed countries on earth, there was a direct correlation between gun ownership rates and gun-related deaths.

From the study's conclusion: "Among the 27 developed countries [that were studied], there was a significant positive correlation between guns per capita per country and the rate of firearm-related deaths."

In other words, the more guns that existed in a given society, the higher the gun-related death rate.

Similarly, the District of Columbia has the lowest rate of gun ownership in the U.S. - less than 4% of people in the nation's capital own guns.  Yet D.C. has the highest rate of gun-related murders at a staggering 16.5 per 100,000 people each year (more than twice the rate of any other state).

The facts indicate that gun-ownership rates within the U.S. don't seem to have any affect on the number of gun-related murders in a given state.

A 2005 study published in the Journal of Criminal Justice found that states with the weakest gun control laws also had the highest number of gun-related homicides.

From the study's abstract: "Results of statistical analyses indicated that States with less stringent
background check policies also had higher rates of firearms homicides.  This finding remained significant after controlling for economic and social conditions."

So while gun ownership rates within the U.S. don't seem to correlate with gun homicide rates, the strictness of background checks does correlate with the number of gun deaths.

According to the same FBI data, handguns are used twice as often as any other type of weapon to commit murder in the United States.

The second most common type of homicide weapon is a non-handgun firearm.  Knives, blunt objects, and other types of weapons are used in only about 30% of U.S. homicides.

Most gun-related murder victims in the U.S. are killed during arguments with people they know, rather than during the commission of a felony by a stranger.

According to the above-mentioned FBI data, the only age group of Americans who are more likely to be murdered during the commission of a felony (robbery, rape, burglary, etc.) than during an argument with people they know, are people over the age of 80.

For people aged 18-65, less than 30% of murder victims are killed during the commission of a felony by a stranger.

So what do all these facts mean?  Quite simply, this:

The notion of needing a gun to protect yourself from dangerous criminal strangers is largely fictional.

If you feel like you need a gun to feel safe, then by all means, take advantage of your constitutional right to purchase and own a gun.  But just be aware that more people die of measles every year in this country than by violence.

Think about that for a second.

Do you really need that gun to be safe?

The other take away from all these facts is that there is an undeniable correlation between high gun ownership rates and high gun homicide rates.  While this correlation is not always seen state-to-state within the U.S., it holds true on a national level.  The simple fact is, when a nation has a large number of guns per capita, they also have a large number of firearm-related deaths.  This is true for every single nation on earth that has a high number of guns per capita.
A Musing By Scott at 4:11 PM 2 comments:

My Two Cents on the Confederate Flag 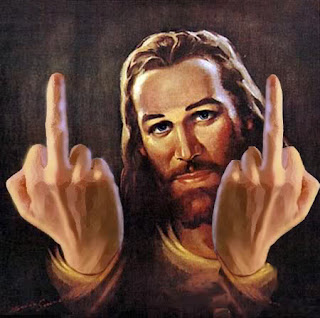 Does this picture offend you?  I can't imagine why it would.

This picture is of our Lord and Savior Jesus Christ, pointing assertively to heaven, reassuring us that he has gone there - as the Bible promises - to prepare a place for us, his followers.

To me, this picture stands for my Christian faith, and thus I want to proudly display it wherever I can.

Does that sound to you like ridiculous nonsense to you?

Well, that's because it is.  Obviously no self-respecting Christian would look at an image like the one above and see it as representing their Christian faith.

No, this image is simply offensive to most self-respecting Christians.  If some Christians find this picture to be representative of their Christian faith, that doesn't change what it stands for to the vast majority of Christians around the world.  To those people, it's ugly and even blasphemous.

Yet this is precisely the kind of argument that waivers of the Confederate flag have been making.  "It doesn't stand for hatred and racism and slavery and treason, it stands for Southern Pride!"

No matter what the Confederate flag represents to a given Southerner, it represents hatred and racism and slavery and treason to the vast majority of Americans.

And that's why it needs to come down from every public installation, from every state flag (yes, that means you Mississippi), and from any other place (besides a glass case in a museum) where it is displayed.

It simply doesn't matter that you, dear Southerner, view it as a symbol of Southern Pride, States' Rights, or whatever other catchphrase you can think of.  After all, when you display it publicly, you're displaying it for other people to see.  And other people find it offensive.

That's reason enough to put an end, once and for all, to the display of this despicable symbol of hate and treason.
A Musing By Scott at 2:37 AM No comments: 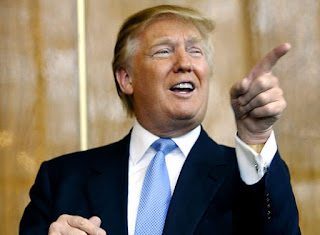 A friend of mine noted today on Twitter that, though he's a Republican, he'd vote for any of the candidates from either party to ensure that Trump didn't win the White House.

I haven't been to a circus since I was a kid, but you know how, before the main events get going, the clowns come out first to warm up the crowd?

That's what Donald Trump is to the circus that is the 2016 presidential election.  He's the clown (or, more accurately, "ass clown") who's warming up the crowd before the actual circus gets going.

By the time the main events begin in earnest, Trump and his antics will be a footnote to the 2016 presidential election.

"But Trump is leading in the polls right now!!" you might say, wringing your hands in consternation.

Indeed, according to realclearpolitics.com, the most recent USAToday/Suffolk poll (from July 14), shows Trump leading all other Republican candidates, earning a total of 17%.  Jeb Bush is next with 14%.  Similarly, a Fox News poll just released today (July 18) shows Trump with the lead among all Republican candidates at 18%, with Scott Walker second at 15%.

So what is one to make of this?  Let me paraphrase John McCain and simply point out that the reason Trump is leading among the Republican candidates right now is because he has stirred up all the crazy right wingers in the Republican party, of whom there are, sadly, quite a few.

The remaining 272 Republican candidates are much closer in line, ideologically, and therefore each have their own little, mostly regional, group of supporters, which numbers way less, for each of them, than what Trump is able to gather to himself right now.

In short, when you see Trump getting the most support among the candidates right now, keep in mind that, using the latest numbers from the Fox poll, 82% of likely Republican primary voters are not supporting Donald Trump!  And that's among registered Republicans!  Once the debates get going and more and more polls start getting taken and candidates start dropping out of the race, Trump will very quickly fade into obscurity.

Quite simply, the 17 or 18% support he's got right now is all he's gonna get!  Because, again, that represents the strongly united "right wing bigot" faction of the Republican party.  No other Republicans are going to flock to Trump when their own favorite candidate drops out of the race.

No, they're going to flock to Bush.

Because in this country, in this era of our history, money and name - especially when those two things are combined - make all the difference, and Bush has the edge in both those categories.

That's also why Bush is going to be running against Hillary Clinton.

Not eager to see a Bush-Clinton rematch?  Sorry, it's gonna happen, because corporate America decides our elections and our candidates.

And why does corporate America decide our candidates?

Because we decided they could.