In any case, I'm working in the family room this morning because Sophie gets upset if she can't be up my ass 24/7, and she's not allowed in the Cave, so the laptop is performing its named duty and I'm sitting here typing while Sophie barks at the chair. 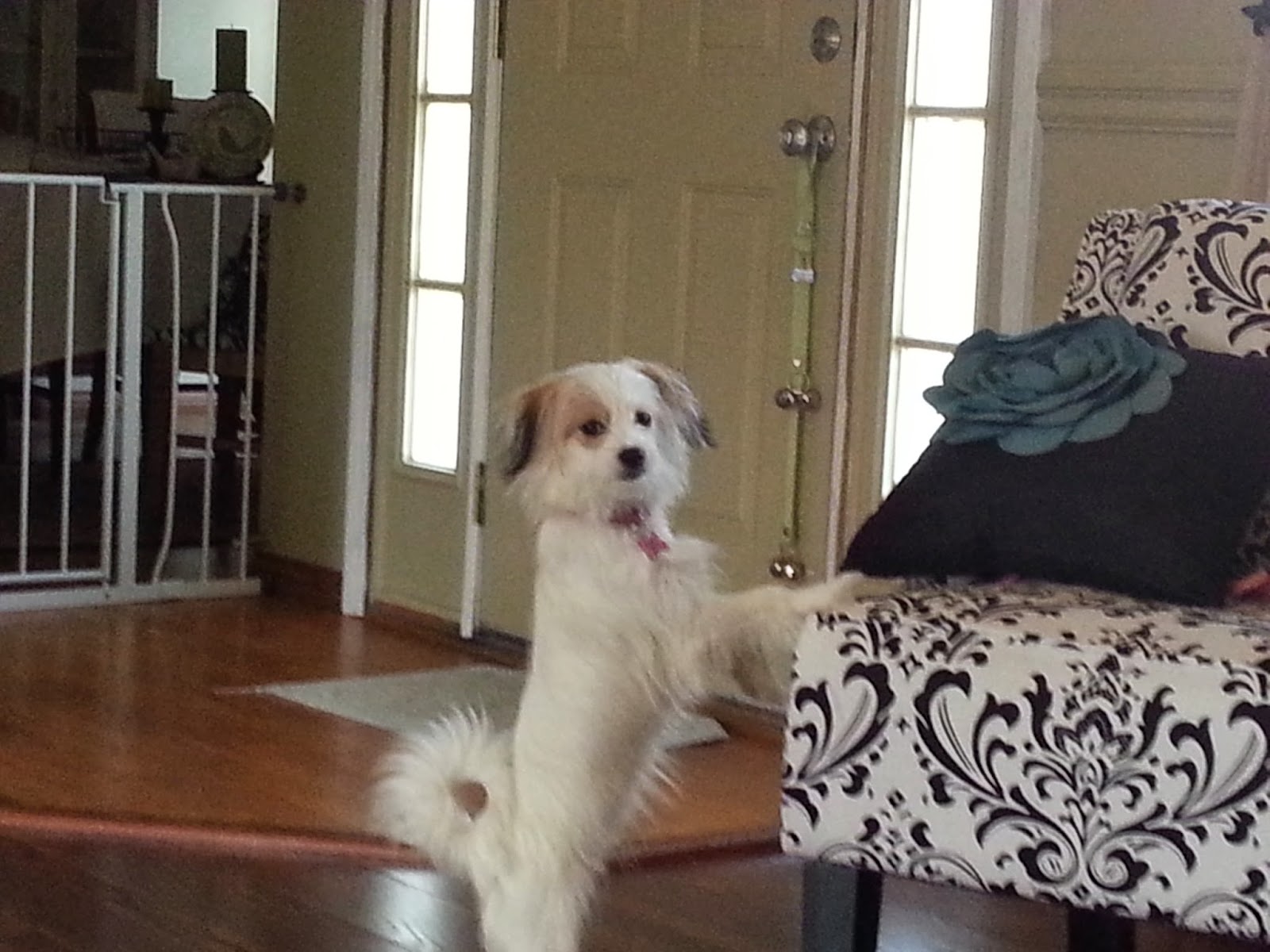 I read an article today about a 9-year-old girl who accidentally shot a gun instructor with an Uzi at a firing range in Nevada.  The poor man's death is tragic, undoubtedly.  Even more tragic is the fact that our society thinks it's okay for a 9-year-old to even look at, much less handle, an Uzi.

It's no secret that I don't like guns.  And it's no secret that I would like to see stricter gun laws in our country.  But I don't think there is any gun-related issue that I feel more strongly about than the utterly insane notion that it's okay for kids to own, handle, and fire deadly weapons.  Yes, I've heard all the arguments from the other side...how teaching children to respect guns and use them safely is how you create responsible gun-owners, yadda, yadda, yadda.

By the same argument, children should be permitted to drive once they are tall enough to reach the pedals - which for most kids means about 13.  The truth is, children under 16 should not be permitted to handle or fire any kind of gun anywhere, ever, for any reason.  Period.

Okay, I'm off my political soap box.  Forgive me.

I had a very productive day off yesterday.  I finished the ghost-writing project I am doing for a friend, I mowed the lawn, I slaughtered a shit-ton of weeds around the fence and the edges of the house with some Weed B Gone, and I got the oil changed in my car.  I did all that and managed to take a nap too.  All in all, it was a good day.  I'm back to work this afternoon, but we're going to the lake for the holiday weekend coming up.  Hopefully the weather will hold up for us.

I'm waiting right now for UPS to arrive with a new umbrella for the deck outside.  A strut broke on our current umbrella, so one side of it is sagging and we look like proud white trash.  Until this heat wave of the last week, it's been a really nice summer for sitting in the shade on the deck.  I'm hoping to have some more nice outdoor weather once we get into September and October.

Check out that pink cummerbund!  This is me and M before Junior Prom at Princeton High School, 1992.  We'd been dating for a year and a half by this point.  I remember thinking I would have liked it better if she'd just done her hair like normal, instead of getting it all professionally gussied up.

Speaking of hair...this photograph proves that I once had it.

A Musing By Scott at 11:14 AM No comments: Links to this post

It's been six weeks since I made a post on my blog.  That's problematic, and I apologize.

The good news is that at least part of the reason for my absence is because I've been getting some writing done.  I've made progress on my political parties book, which has been 90% complete for about a year now, and I've also been doing a significant ghost writing project for a friend, which is also almost complete.

The biggest problem, as always, when it comes to writing is simply finding time.  Working 2nd shift, I leave the house around 1 pm every day.  I typically get up around 9 or 9:30, so that gives me 3 or 4 hours each morning.  That's plenty of time to write, but unfortunately I also have to take care of a 5-month old puppy who needs a lot of attention, exercise, eat lunch, and shower and get ready for work.

By the time I've done all that, there's hardly any time left for writing.  I basically have to not exercise if I want to have a decent amount of time to write.  But that, of course, isn't something I need to give up.  I could, of course, get up earlier, or forego my beloved morning bath (yes, I'm gay), but working 2nd shift, it's really not feasible for me to get up much earlier without suffering for it on the back end of the day.  As for the bath, I do give that up a lot of days, but not always.

Anyway, that's the problem I'm currently facing with writing.  The other thing to keep in mind is that, since my heart attack, my daily routine has become very important to me (that's where that morning bath comes in), and so that's another obstacle...figuring out a way to make writing part of my daily routine, rather than a disruption to it. 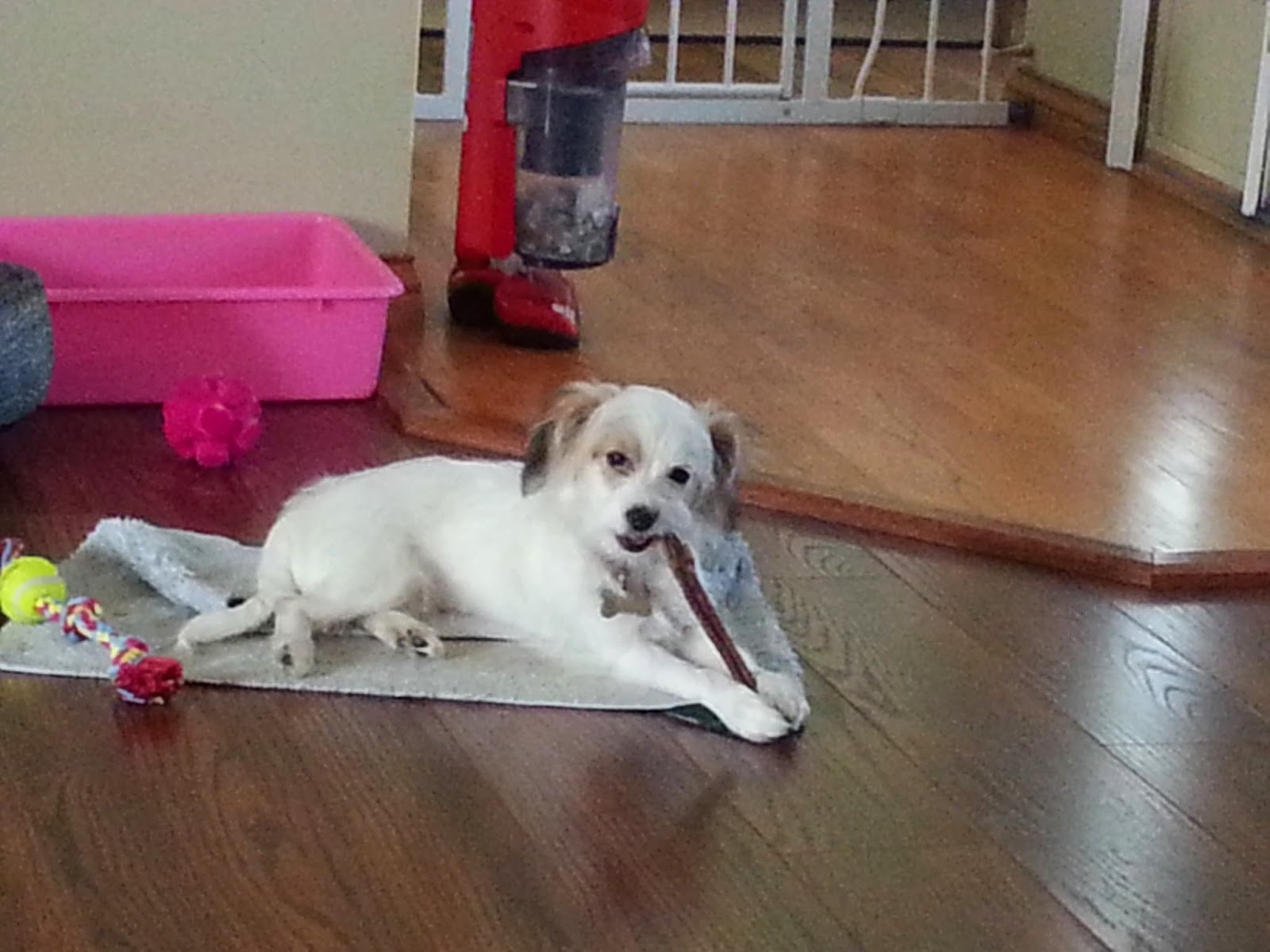 Sophie is entering the adolescent phase of puppy-hood, and although she's fully housebroken and well-trained, she is starting to test the waters a bit.  She's developed a habit of barking a lot to get attention, or nipping at feet/legs/pants.  I'm working to get that under control and am hoping it's just an adolescent phase.  She's been getting her adult teeth in...I think we've found four baby teeth to date.  She's almost six months, so she'll be having her womb torn out of her abdomen here pretty soon.

I really do love that I'm able to walk her on a leash and actually take legitimate walks with her.  Our last dog, Finley, was basically never leash trained at all, and our first dog, Katie, would pull like crazy and also wouldn't let you get more than a few hundred yards from home before refusing to go farther.  With Sophie, we walk a mile or more at a time.  We did about a mile and a quarter yesterday.

I've also recently added a new trick to her growing bag of tricks...the command is "Sphinx," or "Sit like a Sphinx," and she will do just that...lay down with paws outstretched in front and her head up.

I have to work this weekend, but next weekend (Labor Day) I am off until Monday night.  Unfortunately, I have to work third shift on Labor Day, but that will still allow us to go to the lake all weekend and come back Monday - which we would have done anyway even if I didn't work that night.  I'm then off again Tuesday and Wednesday too.  So with the exception of that one third shift, I'll essentially have five days off in a row without having to take a vacation day.

As my faithful Twitter followers know, I have been watching Deadwood on Amazon Prime.  I have the Amazon TV box, so I can watch Prime videos on my TV as well as my Kindle.  I've waited 10 years to see Deadwood and it has not disappointed.  I just finished the first season and I loved it.  I'm already bummed that there are only two seasons left.

I'm currently reading two books (one non-fiction, one fiction, as usual).  The non-fiction is a narrative history of the Norman conquest of England in 1066 called, aptly enough, the Norman Conquest.  For you history dummies, the Norman Conquest, by William the Conqueror, is what established the modern British monarchy and turned England into the country it is today - which is important since Britain would come to have such a profound influence on the entire world.

The fiction book I'm reading is the first in a series by British writer Ken Follett called Fall of Giants.  It's historical fiction told against the background of World War I, and the second and third books in the series carry the story - and the families in it - up through the rest of the 20th century.  Like his other historical novels, it is absolutely wonderful.  Highly recommended it to anyone who likes historical fiction, and particularly 20th century history.

A Musing By Scott at 12:08 PM No comments: Links to this post