Turning In My Feminist Card

About 9 months ago, I wrote a blog post detailing why I consider myself a feminist. It was a way of explaining a new profile picture I had posted of myself: 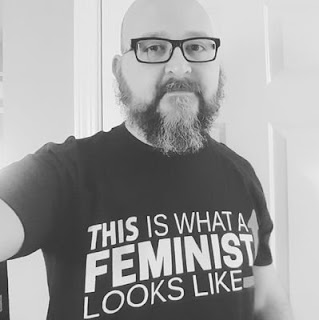 I won't repeat the points I made in that post - click the link above if you're curious.

I have not changed my mind about any of the points I made in that post.

When I first posted that picture in February, I got some blow-back (primarily from male friends), who told me that feminism is not really about equal rights, but rather about wanting to dominate men or blame men for all their problems. I acknowledged that form of feminism and argued that those kinds of feminists represent a loud minority rather than the mainstream of people who believe in equality and women's rights.

However, at this point in time, those kinds of feminists - let's call them radical feminists - are dominating the conversation. They are the only voices being heard in the mainstream media and on social media. Right now, "the feminist movement" is firmly in their hands (much the same way that the GOP is firmly in the hands of the far right).

All I seem to hear these days is a constant barrage against white males (it's always "white males" or "white men") and how awful they are. They're power hungry, they're racist, they're sexual predators, they're insensitive, they're self-absorbed, they're know-it-alls, they constantly "man-splain" and talk down to women.

Here are some of the tweets I've read lately:

"I'm ready for the all-female reboot of America."

"I think a lot of misogyny, homophobia, and racism is related to patriarchy." (In other words, men are to blame not just for misogyny, BUT ALSO homophobia and racism. Women are innocent, or at best have been poisoned by the evil patriarchy.)
t makes them stupid because they don't have all the information necessary."
"Things to leave behind in 2017: Straight white men."

"You can't be sexist towards men. Sexism is based on OPPRESSION. You can be rude/inconsiderate towards men but you cannot be sexist."

"Please believe that all cisgender men, no matter their feminist commitments, are capable of harming women. They’ve been socialized into a rape culture predicated on anti-Blackness, white supremacy, heterosexism, and sexism, and have not done the work of unlearning." (FYI: "Cisgender" is a made-up word that means "straight.")

I could go on and on, of course, but that's already more than enough.

As if their views aren't bad enough, it's made even worse by the fact that the instant a white man responds with anything that sounds even remotely defensive, he is immediately branded as a perfect example of precisely what the man-hater in question was talking about to begin with. They create these scenarios where the only possible response is agreement - disagreement automatically means you're poisoned by, or an example of, the patriarchy.

It's reminiscent of people I used to argue with over JFK assassination conspiracies. If you argued against a conspiracy/multiple shooters, no matter how much evidence you presented, you were automatically a dupe. Because after all, the government controls all the evidence, so they only let you see what they want you to see.

I don't want to be associated with those people. I don't want to have anything to do with people who think that there's still one group in the U.S. that it's okay to openly discriminate against. Replace "white men" or "patriarchy" above with, say, "black people," or "Asians," or "Jews" and listen to what it sounds like.

I don't want to be lumped in with people who think that females are perfect just the way they are, while males need to make some major changes - and those changes, of course, basically involve men acting more like women. Notice how no one ever suggests that women need to "get in touch with their masculine side." Masculinity is bad; femininity is good. I believe men are good as men and women are good as women. I believe men and women both need to treat the opposite sex with respect and dignity. Full stop. I also believe in the apparently radical idea that men (white or otherwise) don't deserve to be lumped together and characterized by their worst members.

So for now I'm turning in my feminist card. I still believe in equality and women's rights at all levels of society and government and religion - that won't ever change. But until the feminist movement stops being dominated by man-haters and man-bashing, I don't want to have anything to do with it.