The Total Eclipse: A Bad Omen 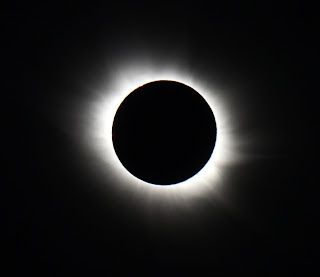 As any student of history, particularly medieval or ancient history, should know, total eclipses are a bad omen. The Assyrians were defeated by the Greeks 11 days after a total eclipse. The Medes and the Lydians literally were in the midst of a battle when a total eclipse overtook the field, scattering the armies. Henry I of England died right after a total eclipse, and a 20-year civil war followed his death.

Eclipses have presaged major events in U.S. history as well. A total eclipse in the U.S. in 1869 was followed by a financial crisis later that year that saw numerous bank closings, a major stock market crash, and an almost 10-year economic recession. A New Year's Day solar eclipse in 1889 was followed by the infamous Johnstown Flood in Pennsylvania, which killed more than 2,000 people, and a near war with Germany over the shelling of warships in the Pacific Ocean (war was only avoided because a hurricane blew through and sunk all the German AND American ships there). A U.S. total eclipse in 1900 was followed a year later by the assassination of president William McKinley.

There have, of course, been a few total eclipses in the U.S. that have not, apparently, presaged bad tidings for the country or the president. 1925, for instance, seems to have been rather tame, as was an 1878 total eclipse and a 1954 eclipse.

In any case, a total eclipse, covering the entire United States, during a year when a tyrant has gained control of the White House, the far right is building momentum and prominence, and we are in a nuclear stand-off with North Korea ... it can't possibly be a good omen.

(FYI: I don't REALLY think total eclipses have some sort of predictive power. But it's fun to speculate.)
A Musing By Scott at 4:25 PM No comments: Links to this post

A Year With the Piano

It was one year ago today that the piano came back into my life.

At my mother's insistence, I started taking piano lessons in, I think, 2nd grade. I continued them until 5th grade, when I finally convinced my mother to let me quit.

In any case, I continued playing the piano on my own time, finally restarting lessons in the 12th grade, before going to college to major in music. My music major eventually became a minor and once I graduated from college, I didn't play the piano much anymore, primarily because I didn't have a piano

A year ago today, I finally got a digital console piano. Hopefully it's just a first step towards eventually getting an actual acoustic piano (maybe I should start a Go Fund Me?).

I am absolutely thrilled with the progress I've made in the last year. Despite hardly playing at all for 20 years, I very quickly got back into the swing of playing and at this point - a year later - I can say I'm a better pianist now than I ever was at my peak in the old days.

To give you an idea of my progress, he's a short clip with my very first recording last August, picking out the opening of Beethoven's "Für Elise," compared to the same piece today:

In any case, when I think back to what started me on the path to a serious love of the piano, it has to be the first movement of Beethoven's Moonlight Sonata. This was one of only two songs my Dad could still remember how to play when I was a kid (actually, he could only remember part of it), and at some point - maybe late middle school or early high school - I started learning it myself.

I eventually learned all three movements, including the quite advanced third movement. This became sort of my "signature song" that I would pull out to impress people.

I recently completed re-learning the first movement, and I am a day or two away from having the second movement down as well. I started working on the third movement last week. So in honor of a year with the piano back in my life, here is the piece that started it all: the first movement of Beethoven's Moonlight Sonata: