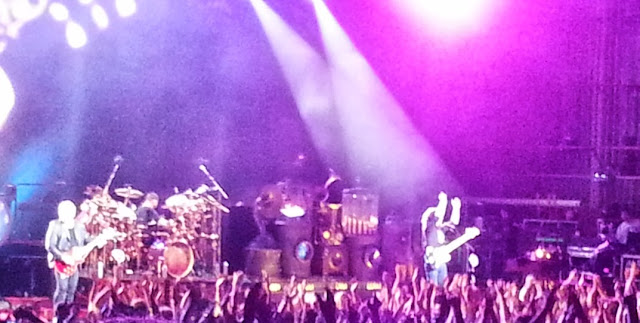 I saw my 9th Rush show on July 2, 2013 at Riverbend.  This was the third time I have seen Rush at Riverbend; the last time they were in Cincinnati was 2008.  Despite this being my 9th Rush concert, there were a couple of "firsts" involved: it was the first Rush show where I've had a cell phone that could actually take decent pictures and videos, and it was the first time I've not had to travel to see Rush.

That second one might need some explanation.  I lived in Lexington until 2009, and Rush has never played Lexington (at least not in the last 30+ years).  So I had no choice but to travel to see them up until that time.  Since moving to the Cincinnati area, Rush has not been here until now.  It was nice to leave after the concert and be home in 20 minutes.

I had decent seats by most people's standards (26th row), but by my own standards the seats were terrible.  For some reason, I always get bad seats at Riverbend.  I've seen them here three times now, and I've never been able to get closer than the second section of seats (rows 20-27).  I've also never gotten a center section; this time around, I was on the left wing of the pavilion, with part of the rear-stage screen blocked by the speaker system.  In 2007, I had seats very close to this same spot.  In other venues, I don't think I've ever been farther back than 15th row, and I've been as close as 8th.

The thing about this particular show is that when I was buying tickets on TicketBastard, I drew 18th row seats, front center section.  But, convinced I was going to be able to get something closer, I threw them back.  I actually drew that same seat two or three different times.  That turned out to be the closest I drew, and by the time I decided to stop trying, I ended up 10 rows farther back, in the second section, on the wing.  Stupid.

ANYWAY...this was the second time I had seen Rush on the Clockwork Angels tour.  The tour began last fall, and I saw them on that leg in Indianapolis.  I was sick at that show, and, to add insult to injury, my car wouldn't start after the show was over and I got stranded and had to rely on my aunt and uncle to come pick me up.  As a result, I was looking forward to seeing the show again and being able to enjoy it more this time around.


As the name implies, Riverbend is a concert pavilion in Cincinnati that sits right at a bend of the Ohio River, just east of downtown.  You can literally see the river from the pavilion.


I'm sad to say that Riverbend really isn't a very good concert venue.  I've seen several concerts here over the years, and I've always found the seating to be poorly designed and the sound to be distorted and full of reverberation.  There are a significant number of seats with restricted views of the stage, due to a relatively small stage that is inset between two enormous walls with speaker arrays mounted outward.  I don't know why the sound is always so bad there, but it must have something to do with the physical geography of the place, because other outdoor venues I've visited don't suffer the same problem.

With the show starting at roughly 7:45, there was daylight for virtually the entire first set.  That set consisted of a significant amount of music from Rush's 1980's repertoire.  Opening with the crowd-pleasing "Subdivisions," the set also included deep cuts like "Grand Designs," "Middletown Dreams," and "The Pass."  The set closed with "Far Cry," the only song they played from their 2007 album Snakes & Arrows.


After a brief intermission, the band returned to the stage with a 7- or 8-piece string ensemble, who accompanied them for the majority of the second set. 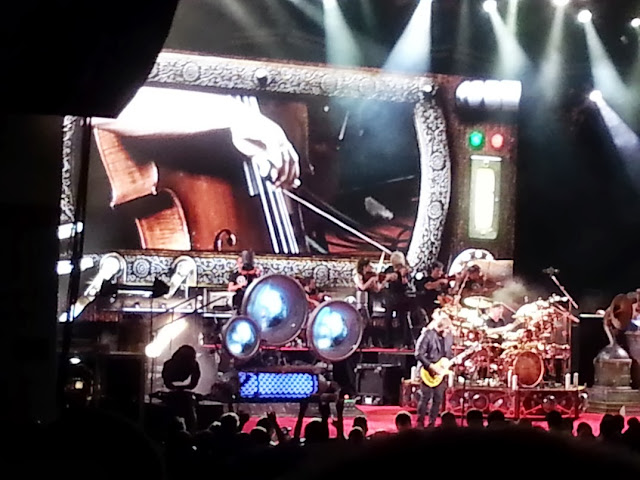 They immediately launched into a series of songs from their new album - 9 in all, played one right after the other.  I read somewhere that this is the most they've ever played from a new album.  With several songs that they rotate in and out night to night, I think they are performing all but two songs from Clockwork Angels on this tour.  I love this album, so it's great getting to hear the majority of its songs live.

As usual, the band used a lot of pyrotechnics in the show.  I managed to capture a brief video of one such display.  Yes, I realize my video quality is poor.  It was a camera phone.


Never fear, the stage didn't actually explode, although it appears as though it did!

After the string of Clockwork Angles songs, Rush returned to some old favorites, including "Red Sector A," "Spirit of Radio," and "YYZ."

During one bridge of "YYZ," drummer Neil Peart always does a very high drumstick toss.  Without meaning to, I managed to get this on video as well.  It's right at the beginning of the video.  Make sure you are watching the drum set.

After exiting the stage briefly, the band returned for an encore, which began with them throwing T-shirts to the crowd.  They then launched into "Tom Sawyer," followed up by the ever popular "2112," which included Overture, Temples of Syrinx, and Grand Finale. 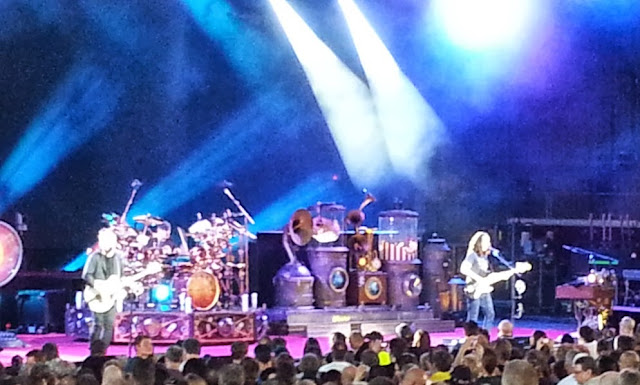 Following the show, I was able to get out of the venue quickly, thanks to thinking ahead and parking right next to the exit.

I wish I could say this was a great Rush show.  In all honesty, it was one of the least memorable of the nine that I have seen.  I think there are three reasons for this.  First, as noted above, I'm not a big fan of the seating or the acoustics of Riverbend, and those were both issues in this show.

Second, having already seen this same setlist once made it less than exciting the second time around, particularly because a lot of the 80's songs they played are not among my favorites.  For me, there is no such thing as a bad Rush setlist, but I have to say that among the 9 shows I've seen across 4 tours over the last decade, the Clockwork Angels setlist is probably the weakest.

Finally, I hate to say it, but I didn't feel like Rush was really into this show.  They were more laid back than I've seen them before, and quite honestly, Geddy's voice didn't sound great.  Of course, he's getting ready to turn the big Six-Oh, and they've done over 60 shows since last autumn.  He's forgiven any voice strain.  Still, I can only say that the show was just "okay."

Of course, it won't stop me from going to see my 10th show at the first possible opportunity.

A Musing By Scott at 1:40 PM No comments: Links to this post