Elegy for the Victims of the Pandemic

I never intended, planned, or expected to be working on the front lines of a global pandemic. If you had told 25-year-old Scott that he'd be doing this at age 45, he'd have probably fainted.

But the winding, hilly, curvy, tortuous path I've followed in life has led me to be in this place, at this time. I am an X-ray tech at a hospital in downtown Cincinnati. I work at night and spend the vast majority of my 12-hour shifts X-raying patients in the Emergency Room and on the various floor units of the hospital. 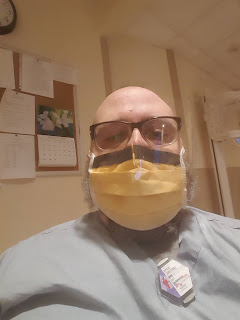 My hospital has spent the last few weeks preparing for a surge of COVID-19 patients. They've placed zippered, air-tight curtains over all the ED rooms that don't have doors; they've cleared out a whole wing to accommodate COVID-19 patients; they've banned all visitors from the hospital; and they have ceased all elective procedures and surgeries. We've seen a steady increase over the last week or two in patients with respiratory symptoms and expect the numbers to continue to increase. 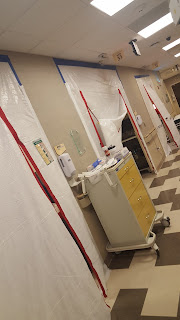 As my friends and family know all too well, my religious beliefs these days wax and wane depending on my mood. As this blog testifies, I have long ago given up the traditional beliefs of my youth. But in these last few weeks, I've found myself continually thinking of the countless sermons and Sunday School lessons I heard growing up about great biblical characters who were faced with circumstances they didn't exactly ask for.

I think of Abraham and the famous story of God asking him to sacrifice his son Isaac, only to stop him at the last second after Abraham proved his faithfulness. I think of David, the shepherd boy, facing off with Goliath, the warrior champion of the Philistines. And I think of Jesus in the Garden of Gethsemane, begging God not to make him "drink this cup."

I don't want to drink this cup. I don't want to be on the front lines of a global pandemic. But this is where my life's path has brought me. I don't normally talk about things like this, but I have always felt that I was built/made/designed for something important. Maybe that's just my white, privileged, upper middle class, male ego talking. But it's how I've always felt.

To use words I might have used in my youth but wouldn't normally dream of using now ... being on the front line of this pandemic is what God has called me to do, whether I like it or not. I'm here, and I have to do it. It's important. And I'm made for important work.

I realize that, as an X-ray tech, I'm not exactly saving lives or even risking my own health as much as others. Nurses, doctors, and respiratory therapists are putting themselves at far greater risks than I am, if for no other reason than because they spend more time with the patients than I do. But I'm part of the team that is fighting this battle, and I've accepted the cup that I've been given. I intend to do the best job I can with it.

All of this is sort of a long introduction to a piano piece that I have written to honor and remember those who have lost their lives in this pandemic. I originally intended to write a really sad lament, but it turned out a little different than I expected. Though I began it in a minor key, I very quickly transitioned into the relative major. Those of you who aren't musicians won't understand what I mean by that, but minor keys are usually associated with sad or dark music, while major keys are typically associated with happy or upbeat music.

Writing a sad song in a minor key is easy. It's been done a million times. But I've always appreciated and enjoyed sad songs written in major keys, because it's harder and less common. Maybe you'll think this song is sad, and maybe you won't. But whether it's sad or not, it's my tribute to those who have lost their lives in this pandemic - a pandemic that I have been called to risk my health and devote my services to.