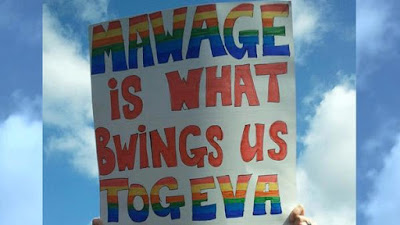 Earlier today, I had the misfortune of reading the following tweet from an Alabama evangelist because it was retweeted by one of my evangelical Christian friends (not really a friend, an old acquaintance from college).

"Of this, be sure: No declaration by a government can change a definition from God. (Gen. 2:24)"

I thought it was funny, because it reminded me so clearly of a quote I once read from a Baptist preacher named Richard Fuller from 1845.

Reverend Fuller was a Harvard educated preacher in Beaufort, South Carolina, and in 1845 had a debate-by-letter with the president of Brown University, Francis Wayland. These letters were later published. They debated slavery, with the northerner Wayland arguing against it, and the southerner Fuller arguing in its favor.

At one point in the letter, Wayland asserted that the institution of slavery was a sin. Reverend Fuller responded with this statement:

"What God sanctioned in the Old Testament, and permitted in the New, cannot be a sin."

It should come as no surprise to discover that Reverend Fuller was one of the leading voices in the creation of the Southern Baptist Convention, which broke off from the regular Baptists over slavery, and Fuller was the Convention's first president.

But this argument from Fuller (and it was a common argument among southern Christians at the time), that slavery was perfectly acceptable in the eyes of God because God, Himself, had ordained it and permitted it in the Bible, is so similar to the arguments made against gay marriage today that it sometimes floors me how little fundamentalist Christians really change.

The issues change, but the attempt to use the Bible to support systemic discrimination remains the same.

Guess what? The Bible does treat slavery as an acceptable human institution, and God does "sanction" slavery in the Old Testament. Similarly, the writers of the New Testament accepted slavery and did not condemn it, but instead simply urged slave-holders to treat their slaves with love and justice.

But in the 21st century, and indeed for the last 150 years, we haven't cared about that. We've accepted that slavery is no longer an acceptable human institution, regardless of what the Bible has to say about it. We simply write those perspectives off as outdated and no longer relevant. And we don't think twice about it.

But even though we disregard Biblical perspectives on issues like slavery (and a host of other things, like the rights of women**), we still cling to them on issues like gay marriage.  We don't consider them outdated and no longer relevant.

Rest assured: as with slavery, women's rights, and countless other social issues, future generations of evangelical Christians will write Biblical perspectives on homosexuality off as outdated and no longer relevant.

And, as with slavery, they won't think twice about it.  It won't affect their ability to be a Christian, and they will wonder why evangelicals of our generation were so out of touch.  They'll simply say that "it was a different time," and "attitudes were different," and then they'll go on with their lives and think nothing of having gay friends, gay fellow church members, gay clergy, and attending gay weddings, and they won't think God has any different perspective on it than they do.

It's just sad that it has to take evangelicals so long to get there.

** As a fun exercise in how attitudes have changed, even among fundamentalist evangelicals, on the rights of women, go read "The Test for an Unfaithful Wife" from the Old Testament book of Numbers, chapter 5, beginning with verse 11 and going through the end of the chapter.  I'll even give you a link to it: here.  Remember, God sanctioned and ordained this in the Bible!
A Musing By Scott at 12:45 PM No comments: Links to this post