(Turning on the camera is like stepping onto a stage for me - even in the privacy of my own studio, when I know the camera's rolling, I'm a basketcase.  Both these performances required video editing when they were done, as you'll undoubtedly notice.)

Nothing to See Here

Opinions are like butts: everybody's got one and nobody wants to hear yours (yes, that's a modified form of the expression, which I did for the benefit of my spouse who thinks I'm gross white trash for initially writing it the original way).

But not everyone has a blog and since this is my blog, I'm going to share my unfiltered opinion on several issues.

Transgender Peeps in the Military: Transgenders in the military is the new gays in the military. In the 1990s, conservatives didn't want gays in the military, either. "They'll be using the same bathrooms as people they are sexually attracted to!" was one of the typical scary scenarios touted by the millions of Republicans opposed to it.  One would envision thousands of unsuspecting American Heroes being anally assaulted in the shower by devious homosexual girly men. Democrats compromised and instituted Don't Ask Don't Tell, which effectively allowed gays to serve, as long as they stayed in the closet.

Now Trump is planning on reversing the Obama-era policy of allowing transgender people to serve openly. An opinion piece I read on USAToday (written by a gay, conservative, evangelical Christian - yes, apparently they do exist) argues that this is the right policy, because transgenderism is an emotional issue that the military doesn't need to be distracted by. The author also brought up the obligatory bathroom issue. In other words, he used the exact same argument conservatives used 20 years ago about gays.

As for the bathroom issue, punishing transgenders because some people are uncomfortable showering with them is like suggesting people who like pizza shouldn't be allowed to eat in the cafeteria with people who are grossed out by pizza.

The simple fact is, this comes down to one thing and one thing only: some people, mainly conservatives, find it distasteful. They don't like it, they don't like that it exists, and it bothers them. And so they want to do everything they can to make it go away. Like with the gay marriage issue, religion often plays a central role in driving these opinions.

Donald Trump: Trump is, quite simply, the worst president the United States has ever had. That's only this blogger's opinion, but keep in mind I've studied American presidential and political history and even written a book about it. So I have at least some level of expertise on the subject. He's not a president at all, but a CEO attempting to run the country like a company. I've written before why this will certainly fail, so I won't go into it here.

He is treating the Oval Office like the headquarters of a corporation. That's not even the worst part of it though. Personally, he's a monster. He is petty, vengeful, narcissistic, and literally represents the dictionary definition of greed. He worships himself in a very open, public, and unapologetic way. The fact that evangelical Christians support him in such wide numbers proves what I've said for years - that most evangelical Christians aren't Christian at all and don't understand the first damn thing about Christianity, Jesus, or what it means to be a follower of Christ. Trump supporters are, by and large, narrow, twisted, angry white people who have finally gotten to experience one of their own in the White House, and they are positively gleeful. Spend just a little bit of time on their Twitter pages and you can see how the worst kinds of Americans really live, think, and feel.

The Republican Party: The Republican Party has been taken over by their own right wing and the whole party is a mess. They created Donald Trump by refusing to unite behind any of their other candidates during the campaign, and now they are simply trying to balance not openly supporting the most unpopular president in U.S. history while attempting to not let him reflect badly on the Republican Party. It's a balancing act that is doomed to fail. They're like an amateur trying to spin plates and you know, eventually, everything is going to crash.

Their interactions with Trump aside, what the Republican-controlled Congress has done over the last few years is nothing short of unprecedented. Denying Obama the right to replace Scalia on the Supreme Court is one of the great historical injustices of U.S. history. When the Democrats retaliated by refusing to let the Senate vote on Trump's candidate, the Republicans literally changed the rules of the Senate in order to confirm him. I've always said the Republicans don't play by the rules. Now they've turned that expression from metaphor into literal fact.

Their actions on healthcare are positively abominable. Drafting bills in secret with just a few senators, no input from Democrats at all, gutting Medicaid and kicking millions off of their insurance plans, a complete disregard for recommendations from their own Congressional Budget Office. The list goes on and on.

Congress has become a useless morass of partisanship and refusal to work across party lines. This is reflected at the state level as well. Compromise has become a dirty word. A word for losers and weaklings. This is America under Donald Trump.

The Democratic Party is too nice and they play too often by the rules. They have never learned from Republicans how to take the country by the throat and throttle it until they get their way. And they never will. And the reason why is because Democrats care too much about others. The Republican Party is now a party of right wing politics. People don't just randomly become right wingers. They become right wingers because they are basically mean. They care about themselves and those that matter to them and they don't really care about anyone else. They are insular, narrow, and driven by fear of the unknown, fear of outsiders, and fear of change. They are typically poorly educated. Their leaders are driven by money and greed and power.

Democrats, on the other hand, tend to become Democrats because they care about others, have more open world views, and are driven by a desire to make the world a better place.  They are typically well-educated. Their leaders are driven by altruism and helping the little guy.

Neither of these descriptions apply to ALL Republicans or ALL Democrats, of course, but I think they explain why Democrats can't compete with Republicans. They are, quite simply, too damn nice and aren't willing to stoop to the level of the Republicans.

Can you imagine, for instance, what would be happening in America right now if the Democrats had won two elections in the last 17 years by losing the popular vote but winning the electoral vote? Do you think there would be a Republican anywhere who wouldn't have abolishing the electoral college as their central platform? Do you think the Republican Party wouldn't be spending hundreds of millions to push for a direct-election of the president? It would, literally, be the number one legislative agenda of the Republican Party.

Yet, that's exactly what has happened to the Democrats in the last 17 years. Two popular votes won by Democrats, but Republicans took the White House anyway. And I haven't heard A WORD about abolishing the electoral college from anyone in office, Democrat, Republican, or otherwise. And you won't, because Democrats don't have any power right now and even when they do get the power, they'll have other things on their mind, like making the world a better place. Furthermore, having benefited twice in 17 years from the electoral college, you don't think the Republicans are just going to merrily go along with any Democratic proposal to abolish it, do you? That's why it's a non-starter even for Democrats.

Speaking of Democrats getting back in power, will they ever? With Republican gerrymandering at the state level, and with Trump's "election commission" that is pretending to fight a battle against a fake enemy under the widely-discredited guise of voter fraud, how will Democrats ever get back into power again? Trump can't stand that Hillary beat him by 3 million votes, so he's made up a fight against voter fraud, suggesting that 3-5 million votes were cast illegally - just enough to mean he would have won the election outright (because it's not like any of those illegal votes were for him!). This has been thoroughly discredited, but he's pushing forward anyway. What he wants to do is disenfranchise people who tend to vote Democratic.  This is Donald Trump planning for his re-election. Keep millions of likely Democratic voters from voting in 2020 so he can be assured of a second term.

Combine that with Republican gerrymandering - where Republican-controlled state legislatures change around congressional districts to ensure that they don't lose seats in the House of Representatives. Since the majority of states have Republican legislatures, this means that it is highly unlikely that the Democrats will be able to win a majority in the House of Representatives any time in the foreseeable future. This doesn't affect the Senate, because Senators don't have districts that can be altered. Which of course is why the Senate is much closer to 50-50 than the House is, even though it's the same people voting for both chambers.

If you've read this far, you must really like me. I think I'm done for now.
A Musing By Scott at 3:09 PM No comments:

A Project 30 Years in the Making

Today I completed a project I first began thirty years ago.

This was all designed to be "for my children" and in it I address my future children and tell them that these are their great-grandparents.

I go on to do a walk-through of their house, describing each room, including a priceless description of a "microwave oven" and instructions on how to microwave a hot dog ("Assuming you still have hot dogs in the future"). I talk baseball and UK basketball and describe the Cubs jersey I was wearing at the time. Probably this one: 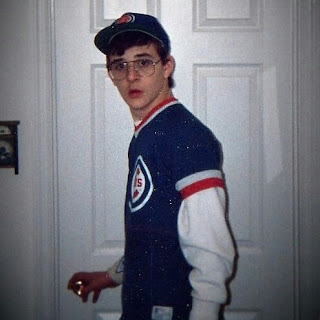 Later I recorded brief conversations with my father, mother, and sister, so they could greet my children.

Occasionally, throughout the tape, my 13-year-old self from the following year cuts in to tape over certain parts that embarrassed me, continually remarking, in a puberty-deepened voice, about how "stupid and dumb" I was "back then."

In any case, today was the day when I finally introduced this gem to my children. There was nothing special about today, I just decided today was as a good a day as any.

So I have finally completed this 30 year project, having faithfully hung on to the tape for all these years. I plan to digitize it and upload it (privately) to YouTube for family (or friends) who may be interested. It'll be private so it will require a link. Let me know if you want it.