I still stick by my decision to bow out, but I simply could not keep quiet about the latest, and perhaps most egregious, sound bite to come from Donald Trump.

In case you're clueless, at a campaign stop in North Carolina, Trump said that "Second Amendment people" could "do something" to stop Hillary Clinton from appointing anti-gun justices to the Supreme Court.

My first reaction, when I heard about what he had said, was to assume liberals were blowing out of proportion something stupid that Trump had said.  That happens, after all, on a weekly basis.  Not that I don't think Trump is capable of literally saying anything, but advocating the assassination of an opponent is a bit much.  After reading more about it, I went back and forth about whether he was genuinely talking about assassination, or if he was - as he and his PR people have claimed - talking about how Second Amendment people are really good at uniting and can therefore stop Hillary at the polls.

The bigger context was Trump listing off bullet points (no pun intended) of things (he says) Hillary wants to do as president, and contrasting them with things he will do as president instead. The fourth item on his list was: "Hillary wants to essentially abolish the Second Amendment." After stating this, he notes that Hillary, as president, will be able to pick whatever (anti-gun) justices she wants for the Supreme Court, and there will be "nothing you can do" about it.  As people in the audience begin to boo and catcall, he says: "Although the Second Amendment people ... maybe there is, I don't know."

When you watch the entire thing in context, it does seem pretty overwhelmingly clear that Trump was making an assassination joke, and not talking about Second Amendment supporters uniting to stop her at the polls.  He wasn't talking about electing Hillary Clinton.  He was talking about Hillary Clinton - as president - appointing anti-gun justices to the Supreme Court, which would help her (in Trump's view, anyway) to "essentially abolish" the Second Amendment.  No way to stop that once she's president, he says - except maybe if the "Second Amendment people" do something.  In context, the implication is very, very clear.  He even goes on to note that it "would be a horrible day" if she were able to appoint justices to the Supreme Court.

If he were talking about stopping Hillary on election day, why would he say there was "nothing you can do" about it, except "maybe" the Second Amendment people? That would be Donald Trump suggesting he can't beat Hillary Clinton, and unless you live under a rock, you know that Trump would never, ever openly suggest that he can't beat Hillary.

Aside from the context, there are a few other important clues to his meaning as well.  First, his tone of voice.  You have to watch the video to hear it, but his tone of voice when he makes the comment - sort of as a joke out of the side of his mouth - makes it clear that he's joking about assassination and not making a serious statement about the uniting power of Second Amendment supporters.  His tone, alone, makes that argument ridiculous.

Second, and perhaps most importantly, is the crowd reaction.  Clearly people in the crowd thought he was joking about assassination.  After he makes the statement, you can hear tittering laughter, and you can see it on the faces of a number of people in the audience behind Trump. For instance, if you watch the video, you'll see an older, bearded man on the right turn to his wife and say "Woaaah!" before they both break into laughter. 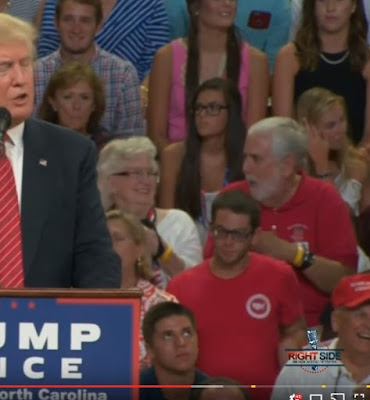 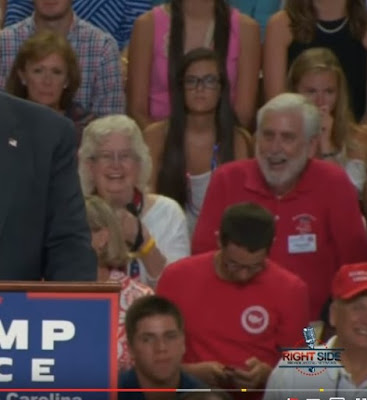 It is abundantly clear from watching and listening to the audience's reaction that they took his comment as a joke about Second Amendment people taking Hillary out.

So what now? Trump made an assassination joke about his opponent. There's no question it WAS a joke - that much is obvious from his tone and demeanor and the audience's reaction.  He wasn't actually calling for someone to shoot Hillary.  And certainly nothing Trump says will stop his most ardent supporters from supporting him (this is a guy who openly mocked a handicapped person on stage, accused a female reporter of being on her period because she asked tough questions, and made a joke about his dick size during a presidential primary debate, after all). But there can be no doubt that this latest remark by Trump simply adds to what is already the most outrageous and dangerous candidacy by a major party candidate in the history of the United States.

And I don't say that lightly. I have studied and even written a book (an Amazon bestseller!) about the history of American political parties, so I know what politics in America is like and what it's been like.  There have been some nasty campaigns in the past and some really devious and dangerous candidates.  But there has never been a candidate for a major party who represents such a serious threat to the stability and integrity of the Executive branch of the U.S. government.  Statements like the one he made in North Carolina - even jokes - are evidence of that.

A Musing By Scott at 1:08 PM No comments: Links to this post