Musings of a Saturday Night 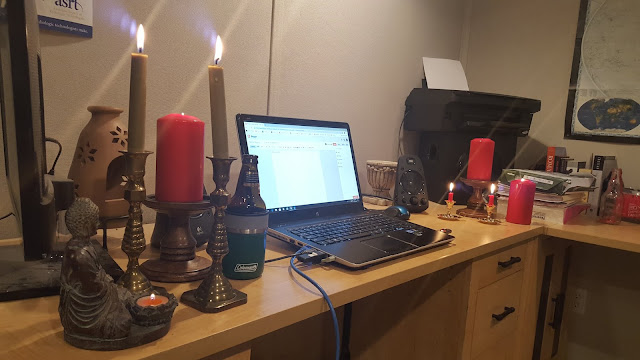 I'm trying to get my ambiance going up in here.

Yes, I have a miniature chiminea and a goddamn Buddha.

Have I mentioned that I've been in a materialistic phase lately? This might require a bit of explanation. I've never been a materialistic person. Oh, I mean I have as much shit as the next average white middle class dude, but I've never been one to constantly buy stuff for myself. I have shirts in the closet that I've been wearing for 15 years. I've had the same work shoes for the hospital since about 2011. We still have dishes in the cabinet that we got when we got married...21 years ago.

But since the spring, I've been increasingly wanting to buy shit. Of course, it's not the typical shit that average people like you would buy...it's stuff like old man hats and musical instruments and old vinyl records and wax candles.

Of course I've still been playing tons of piano. I just completed songs by Dvorak and Liszt and have started new pieces by Beethoven and Schumann. I'm also learning a really beautiful piece by a concert pianist and composer named Nobuyuki Tsujii. He's actually blind, which makes his playing ability all the more amazing. The piece in question is an elegy dedicated to the victims of the 2011 tsunami that killed thousands in Japan. ANYWAY, it's a gorgeous song. I highly recommend you Google it, OR wait until I post myself playing it on YouTube. :)

Do you play the piano? Do you know anyone who does? If so, you can buy my original compositions and arrangements here. (You can also listen to them there as well.)

I think I've decided to leave the Democratic Party. Oh, I mean, I'll still frickin' vote for Democrats, and I have no plans to actually update my registration, but I think I'm going to start self-identifying as an Independent liberal. The truth is, I've always been an independently-minded person. That's been true since childhood, and has in many ways defined my adulthood. I used to feel like it was more true of religion than politics, but now I'm beginning to see that it's true of politics as well. The reaction of the Democratic Party as a whole to the Trump Era has really alienated me. Their uncompromising focus on identity politics to the exclusion of practically all else has really put a bad taste in my mouth.

I realize much of what I'm experiencing has been horribly skewed by the broken lens of social media. These apps show you what they think you want to see, based on what you are most likely to click or or otherwise interact with. The result is that you see only what Twitter (or Facebook, or whatever other app you use) wants you to see.

I've really started thinking that maybe it's time to get off social media completely. I deleted my Facebook page over a year ago, but I am still active on Twitter and Instagram. I'm not sure, at this point, that either app really enriches my life. The fakeness of Instagram is almost too much to bear, while Twitter is just nonstop political activism. I'm just getting to the point where I'm totally over it. I can't quite make myself stop, though. It's sort of like a drug.

Well, this post has turned to crap. I had much higher hopes for it when I started. Now I'm just kind of over it.