The Boy King, the Governor, and the Dwarf

When we study history, we tend to have a profound sense of the gap that separates us from our subjects. Reading, for instance, about Cleopatra's decision to nobly commit suicide by snake bite, rather than be paraded as a captive through Rome by the triumphant Octavian, can provide interesting and intriguing insights into history, but the gap between us and them - the chasm between our world views and theirs - is difficult to cross. The world was an immensely different place for them than it is for us.

But sometimes we read stories from history that seem to bridge that chasm and bring about a sense of unity with our ancient subjects, leading us to the realization that humans of the ancient past really weren't so much different than we are today.

Such is the case with the ancient Egyptian king known as Pepi II, a ruler of the Old Kingdom of Egyptian history, living around 2200 B.C.E.

Pepi is famous, primarily, for being credited with the longest monarchical reign of any king or queen in all of world history. We have two sources for his reign. The earliest is the so-called Turin King List, which was created around the time of Ramses II - roughly 1200 B.C.E. This document lists all the kings prior to Ramses and gives their length of reign. Pepi II is credited with 90 years in this text. The second source comes from the writings of Manetho, a historian who lived around 250 B.C.E. He credits Pepi II with a 99 year reign.

Traditionally, historians have split the difference and suggested a reign of roughly 94 years. Some modern experts, however, are skeptical of this. When ancient Egyptians wrote about things the king said or did, they tended to date their work. Thus, we may find a royal proclamation dated to Year 7 of the reign of so-and-so. In the case of Pepi II, we have found nothing dated beyond Year 64 of his reign. This, of course, does not mean he must necessarily have died shortly thereafter; it could be that we simply haven't yet found whatever artifacts may still exist from that period. This lack of archaeological evidence beyond Year 64, however, is what has led to the modern disputes.

In any case, whether 64 or 94 years, Pepi II ruled for a very long time, particularly by ancient Egyptian standards. Even at 64 years, he'd have the second longest reign of any ruler of ancient Egypt - a period covering roughly 3,000 years.

We know from archaeological evidence that Pepi took the throne as a 6-year-old. Only two statues of Pepi have ever been found, and both depict him as a boy king. On one, he is perched lovingly on the lap of his mother.

It is from this period of Pepi's reign that we find a story that is rather striking in its ability to bridge the gap between the modern and the ancient.

Like the other rulers of his era, Pepi's capital was in northern Egypt, at Memphis (near modern Cairo). Being based so far from his southern border, he needed strong governors in the south to maintain peace and commerce. One of these governors was a man named Harkhuf, who had served first under Pepi's father, then under Pepi. He probably died while Pepi was still a boy king.

Based out of an island city called Elephantine, Harkhuf was not just a governor, but also an explorer into the nether regions south of the Egyptian kingdom. In the area of modern day Sudan, these regions were wild and mysterious to the ancient Egyptians, but full of precious metals and trade goods. Harkhuf evidently made several trading journeys into this region, bringing back with him numerous valuables which he delivered to the king at Memphis.

Following one of these expeditions, he returned to Elephantine and sent a letter north to the boy king Pepi providing a list of the things he had procured, promising to bring them to the king as soon as possible. Among other things, he apparently told Pepi that he had discovered, and brought back with him, a dwarf from "the land of the spirits." Dwarfs, who likely came from the pygmy tribes of central Africa, were highly prized by the ancient Egyptians, and were believed to have supernatural powers. Like dwarfs of the 19th century and even today, they also provided a source of entertainment.

We know of this story about Harkhuf and the dwarf because a letter of response that Pepi sent back to Harkhuf was inscribed on Harkhuf's tomb in southern Egypt. It is dated to Year 2 of Pepi's reign (which actually means the fourth year, because regnal years were biennial - meaning 730 days instead of 365). So Pepi was about 10 years old. Here's what the letter says (with a few parts cut out, or summarized, for length's sake; also, note that when Pepi says "my Majesty," he is referring to himself):


I have noted the matter of your letter, which you have sent to the king, to the palace, in order that one might know that you have descended in safety from Yam [that is, the mysterious region south of Egypt]...You have said in your letter that you have brought all great and beautiful gifts...

You have said in your letter that you have brought a dancing dwarf of the gods from the land of spirits...You have said to my Majesty: "Never before has one like him been brought by any other who has visited Yam."

Come northward to the court immediately. Bring this dwarf with you, which you have taken living, prosperous and healthy from the land of spirits, [so that he may] warm and gladden the heart of the king of Upper and Lower Egypt, Neferkare [that is, Pepi II], who lives forever.

When he goes down with you into the boat, appoint excellent people who will be beside him on each side of the boat. Take care that he does not fall into the water. When he sleeps at night, appoint excellent people who will sleep beside him in his tent. Check on him ten times a night. My Majesty desires to see this dwarf more than the gifts of Sinai and of Punt. If you arrive at court with this dwarf still living, prosperous, and healthy, my Majesty will do [great things for you], since it is the heart's desire of my Majesty to see this dwarf.

Harkhuf must have made it to Memphis with the dwarf safely in tow; the fact that he inscribed Pepi's letter of praise on his tomb is evidence of this. If he had failed, the letter would have been like a condemnation and a reminder of the failure.

As such, we can envision the 10-year-old boy king bouncing with delight as this little pygmy from central Africa astounded the court with his spirit dances and magic tricks. But more than anything else, the boy king's undisguised excitement at the prospect of seeing the dwarf is what really connects us to the past. He was just a kid, not much different than kids today, who would also be delighted at the pranks and antics of a costumed dwarf.

As we saw above, Pepi went on to live a very long time. As he grew older, the stability of his government weakened. This fact may provide evidence to support the notion that he ruled well into his 90's. In his last decades - no doubt a feeble old man - he was not able to keep the same level of control over his nation and its more ambitious provincial rulers. After his death, Egypt fell apart, beginning the era that Egyptologists call the First Intermediate Period. Centralized government collapsed, and Egypt fell into a state of decay, with various rulers ruling small regions from local capitals, often warring with each other. This lasted for about 100 years, until Egypt was finally united again under a powerful southern ruler named Mentuhotep II. He defeated his northern counterpart and established the Middle Kingdom of ancient Egyptian history.

But regardless of what happened late in his reign, or after his reign, it is this story from the early years of his reign, as a boy king perched on his mother's lap, that has the ability to warm the heart and connect us, in common humanity, with figures of the ancient past. 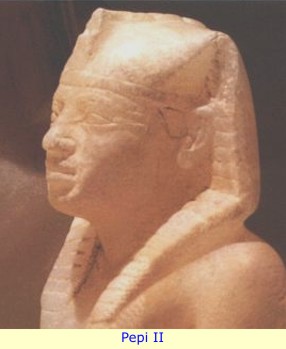