The Government of the United States of America is not, in any sense, founded on the Christian religion.
~ from the U.S. Treaty with Tripoli, 1797


After establishing its independence from Great Britain in the late 1700's, the United States faced one of its very first foreign relations crises: piracy in the Mediterranean Sea and Atlantic Ocean.  This piracy was based out of the so-called Barbary Coast of North Africa. 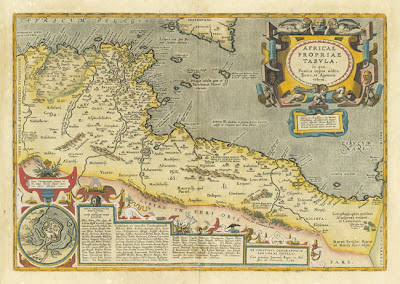 Muslim sailors from these North African kingdoms and caliphates were given the legal right to prey on shipping from European, and eventually North American, countries.  The justification for this was essentially a religious one - these western ships were fair game, because they were owned by Christian nations, who were considered the religious enemies of Muslim nations.

In 1785, just two years after the end of the Revolutionary War, two American ships were captured by Barbary Pirates and the men crewing those ships were sold into slavery in North Africa, with ransoms put on their heads.  There was even a rumor during this time that Benjamin Franklin, on a voyage overseas, had been captured, though it was not true.

In any case, the fledgling United States began establishing official diplomatic relations with the various Muslim countries of the Barbary Coast, in an effort to keep their ships safe from Barbary pirates.  As a result, they enacted a series of separate peace treaties with these countries throughout the 1780's and 1790's.  One of these was the Treaty with Tripoli in 1797.

This treaty established friendship between the two nations, and was unanimously approved by the U.S. Senate, and signed by President John Adams.  It is a matter of historical fact that copies of the treaty were given to each senator, and the entire treaty itself was read aloud on the Senate floor, prior to the unanimous vote of ratification.

One of the clauses in this treaty is the now somewhat infamous phrase I quoted above.  It comes from Article 11 of the treaty, and in context, this article argues that because the United States is not an established Christian nation, the Muslim region of Tripolitania had no religious quarrel with the U.S. - thus no reason to prey on U.S. shipping.

There is no question that this phrase from an obscure 200-year-old treaty has been over-emphasized in recent years by those wishing to widen the gap between Church and State.  But there is also no question that this government document, unanimously approved by the United States Senate and signed into law by John Adams, is an inconvenient one to those who wish to argue that the U.S. was founded on "Biblical principles" or is a "Christian nation."

The First Amendment to the U.S. Constitution states that the government will not make any laws "respecting an establishment of religion."  This phrase is clearly referring to state-sponsored religious institutions, with a strong eye towards the Church of England, which the King of England controlled.

This amendment, however, has been interpreted by the Supreme Court to include a lot more than simply outlawing government-sponsored religions.  Instead, judicial rulings for more than 200 years have established this amendment as effectively separating Church and State, and thus keeping religion out of government.  Many people have differing opinions about this, but the Supreme Court has the constitutional mandate, and the constitutional authority, to interpret the Constitution, and that means their opinion is the final say on the matter.  It is worth noting that virtually every incarnation of the Supreme Court over the last 200 years, both liberal and conservative, has agreed on this issue - the First Amendment irrevocably separates Church and State.

This separation of Church and State is one of the hallmarks of the United States, and one of the most important and enduring legacies of our nation.  Because of it, any American can worship as they choose, or not worship at all.  Any religious organization can build structures and meet there peaceably.  Religious organizations do not have to pay taxes to either the state or federal government, and their rules and regulations do not have to meet with any approval of government officials.  While they must still remain in compliance with criminal laws, they have no obligation to meet the requirements of civil laws passed by the government.  Every citizen of the United States, regardless of their religious or political stripes, benefits enormously from this very important and distinctive American tradition.

You may now be asking yourself: What does a 200-year-old treaty on piracy and the U.S. Constitution really have to do with the 21st century issue of gay marriage?

Quite a bit, as it turns out.

The Treaty of Tripoli shows that our earliest leaders viewed the United States government as a secular entity.  The United States was not "founded on the Christian religion," nor could the United States pass laws establishing religious principles as legal precedents.  That does not mean government officials can't be members of a religion, nor does it mean that U.S. officials can't use their religious beliefs as a way of influencing their own governing.  What it does mean, however, is that religious principles cannot be legislated - at least not if we want our laws to be constitutional.

Enter gay marriage.  From my experience, both in speaking with individuals personally, and in reading numerous sources, the overarching opposition to gay marriage is a religious one.  Of course there are other reasons given too, most notably issues surrounding traditional gender roles and family values, and slippery slope arguments about how gay marriage will lead to an "anything goes" perspective on the institution of marriage, including polygamy, incest, and zoophilia (sex with animals).  As the argument goes, if two men can get married, why not a man and a goat?

But in my experience, all these other arguments are secondary.  They are the "justification" arguments - and not very good ones, at that.  But the real source of the opposition to gay marriage is a religious one.  The other arguments simply attempt to deflect that fact.  I'm sure there are atheist/agnostic/non-religious people out there who are opposed to gay marriage, but I don't really know any.  The far and away vast majority of opposition to gay marriage is coming from people who are religiously opposed to gay marriage.  I am certain this is an undeniable fact, and if you don't agree with me, then consider these statistics:

In 2010, a Gallup poll found that among those people who said that religion was "very important" in their lives, 70% opposed gay marriage.  On the flip side, among those who said that religion was "not important" in their lives, the numbers were basically a mirror image - 70% supported gay marriage.  Similarly, among the four geographic regions of the U.S. - North, South, Midwest, and West, the most religious region, the South, also had the lowest support for gay marriage, at about 35%. 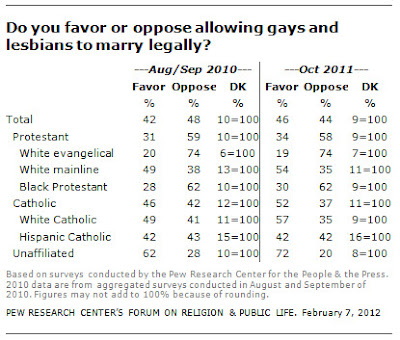 I hope by now you see my point: it is unconstitutional in the United States for religious beliefs to form the basis of legislation.  If my Christian beliefs tell me that gay marriage is a sin, that fact can have no bearing, legally, on whether gay marriage is legalized or not.  This is why we have no laws banning sex before marriage, mandating baptism, or banning women from leadership roles over men (all of which are religious beliefs).

The separation of Church and State works both ways: the government can't pass laws regulating religious beliefs or practices, and religious beliefs and practices cannot be legislated and mandated.  This is why it is illegal for religious organizations to be involved in politics - they are separate from the government, they don't pay taxes, so they can't have an official voice in government.  Of course, free speech still permits them to express their views, but their religious views cannot form the basis of legislation.

And yet, many of the same people who bark about fidelity to the Constitution are the very same people who believe their religious beliefs regarding homosexuality should be legislated and made applicable to all Americans.

Consider the mission statement provided on the homepage of a group called Tea Party Nation:

Tea Party Nation is a user-driven  group of like-minded people who desire our God-given individual  freedoms written out by the Founding Fathers. We believe in Limited  Government, Free Speech, the 2nd Amendment, our Military, Secure  Borders and our Country.


This same Tea Party Nation has stated that gay marriage "will become one more factor in the destruction of America."

This constitutional inconsistency is just one of the ways in which hypocrisy creeps into the discussion about gay marriage.

In the second part, Christian Opposition to Gay Marriage: A Theological Argument, I will look specifically at Christianity and the Bible, and how Christian opposition to gay marriage is not only constitutionally irrelevant, but theologically inconsistent.