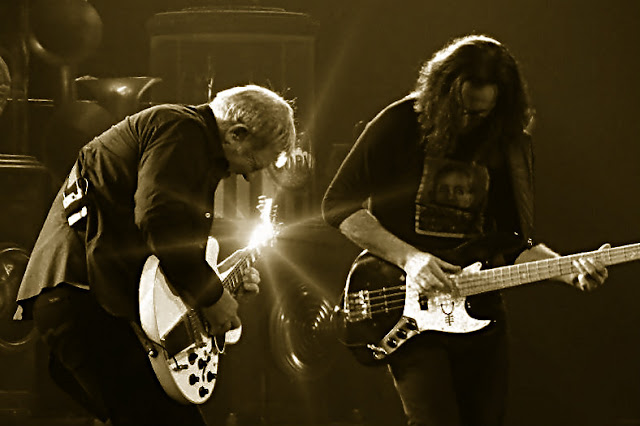 On Thursday, I attended my seventh Rush concert, this time in Indianapolis.  Now, seven may sound like a lot to some people, but be assured, it's nothing compared to many Rush fans.  I discovered Rush later than some of my fellow fans, not becoming interested in them until I was about 26, and I didn't attend my first concert until 2004.  By then, they had already been putting out albums and touring for thirty years.  I know other fans who have seen thirty or forty shows over the years.

In any case, I had originally intended to sit this tour out, not because I didn't want to see them again, but simply because they weren't coming anywhere very close to me, and I figured I'd save the money.  My wife was totally down with that.

But after I heard their new album, released in June, I simply couldn't resist** the urge to find a show and buy a ticket.  The closest venue was Indianapolis (about two hours away), so that made the most sense.  However, the tickets for the show had already been on sale for over a month by that time, and I had very little hope of getting a very good seat.

It's important, at this point, to note that I refuse to see concerts unless I have a very good seat.  I've simply seen too many shows up close to ever settle for the rafters.  That may sound snotty, but I don't go to that many concerts, so when I do spring for a show, I want to be up close.

As I had feared, the ticket offered to me on TicketBastard was not very good.  So I made the somewhat rash decision to purchase a ticket through a broker called VIP Nation.  I received a 13th row, center stage seat, a commemorative ticket and show pass, a T-shirt, and a bag.  The cost was $325.00 - way more than I've ever dreamed of paying for a concert, even Rush.  But it had to be done.

Despite the fact that my car had been acting up for about a week prior to the show, and despite suffering from a sinus infection, I said a little prayer and headed off to Indianapolis on Thursday.


The weather was fine and the car ran well and I arrived at the venue around 5 pm.  Since I had some time on my hands, I had a few beers in a nearby bar called The Tilted Kilt.  Think British Pub mixed with Hooters.  The servers were all in skimpy kilts, knee socks, and push-up bras with bare midriffs.  It was pleasant.  I'm pretty sure there was something on TV.

Anyway, when the doors opened, I headed inside and found my seat in the 13th row.  Next to me was a middle-age father and his teenage son.  On the other side was a forty-something woman and her husband or boyfriend.  She told me she had seen Rush thirty-five times, but this was the first time she had ever been on the floor close to the stage.  She was so excited she was literally quivering.  She was also drunk.  She was so keyed up, I was afraid to bump her for fear I'd give her an orgasm.  It was unbelievable how excited she was.  Her partner seemed embarrassed.

Right on time, the lights dimmed and the opening video montage came on.  These are always amusing and quirky little films starring the three members of Rush, usually dressed up in some outrageous costume and doing extraordinarily bizarre things.  While the video is playing, the members sneak onto the stage in the dark, then the video segues into the opening chords of the first song - in this case, the 1982 fan favorite, "Subdivisions," with its familiar and chest-buzzing opening keyboard riff.

The first set can best be described as "Deep Cuts of the 80's."  For hardcore fans like me, this was very satisfactory, but I'm sure a lot of casual Rush fans, who prefer the more familiar older stuff, were baffled by the lack of "concert standards" like "The Spirit of Radio," "Freewill," and "Limelight."

By the end of the first set, I was feeling pretty crappy.  Naturally, I had been on my feet the whole time, bouncing and fist-pumping and whooping it up, and my sinus infection did not agree with these actions. I was glad to have twenty minutes to sit in my seat.

During the second set, the boys did something they have never done before: they brought other performers onto the stage to play songs with them.  In this case, a small string orchestra consisting of about six violins and two cellos.  This group played along with every song of the second set except the final one.  The first nine songs of the set consisted of songs from their new album, "Clockwork Angels."  About halfway through this run of new songs, I heard the girl next to me - the one who was wetting herself at the beginning of the show - remark to her guy: "Guess we should have bought this album, huh?"

They ended the set with another song from the 80's, one from the 90's, then two old fan favorites, "YYZ" and "Working Man."  The latter was their first radio hit, from their first album in 1974.

After letting the crowd cheer and scream for a few minutes, Rush came back out for a 2-song encore, ripping into their most famous song, "Tom Sawyer," and finishing with what is probably their most popular concert song, "2112" (the latter in abbreviated format, since it's almost 20 minutes long).

Overall, I enjoyed the show and it seems to me that, despite being over 60, the boys still have it.  Every new Rush tour breeds fear in the breast of the hardcore Rush fan that this will be their last, but it seems to me like they could keep going for a while.  I sure hope so, anyway.

By the time the show ended, I was sweaty, tired, and had a sinus headache.  I was looking forward to getting into the air-conditioned car, getting a Diet Dr. Pepper for the road, and getting home to bed.  I was already planning on going to the doctor the next morning.

I had parked in a pay lot near the venue in downtown Indianapolis.  Recall that my car had been acting up for about a week prior to the show.  I got out to my car, got in, turned the key, and it wouldn't start.  Turned the key again.  Still wouldn't start.  I now found myself sick, tired, ears buzzing, and stranded in a strange city, in a downtown parking lot at 11 o'clock at night.

By sheer luck, I have an aunt and uncle who live in Indianapolis.  Without dragging this sorry tale out, they came and got me, waited with me until after 1 o'clock for Triple-A to arrive (their Triple-A account), and arranged to have the car towed to a local Nissan dealer.  They also offered to let me take their car home the next day so I could get to work, then bring it back Saturday to pick up my own car.  After the car was towed, they took me home, put me up in a room, watered and drugged me, and let me sleep.  I got up the next morning to towels and a new toothbrush in the bathroom.  I called the Nissan place, explained my predicament, and they got the car fixed by 9:30.  It was just a sensor that was easily replaced.  Big relief.  I made it home with almost two hours to spare before I had to be at work at 1 pm.

And so ends another sordid account of Scott and Rush concerts.  This wasn't the first time I had driven a long way to watch Rush only to find my car not starting when I attempted to leave.  The previous time I was able to get the car started after about ten minutes, and it turned out to be nothing - just a glitch or something.  That was five years ago.  Same car.

But the sordid tale ends with a silver lining in the clouds: the silver lining of family.  How fortunate to have family in Indianapolis who love me and care about me and are willing to put themselves out, late at night, to haul my sorry ass out of a downtown parking lot, put me up for the night, and help me get my car fixed!  And they were going to let me take their own car home, if need had been!  So a big shout-out to Uncle Michael and Aunt Sheila - thanks for being there for me :)

** As I have been typing this post, I have had my Rush mix playing in the background.  When I typed the word "resist" above, my thoughts immediately went to the 1996 Rush song by the same title.  Wouldn't you know it, not five seconds later, "Resist" popped up in the mix - out of 172 songs.
A Musing By Scott at 11:00 PM