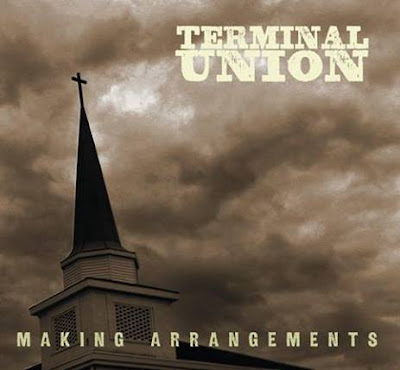 "Making Arrangements" is the debut album of a local Cincinnati band that I have recently discovered called Terminal Union.  Anyone familiar with Cincinnati will likely recognize the local flavor of the band name: one of Cincinnati's most prominent landmarks is Union Terminal, built for trains in the 1930's, now converted into the home of the Cincinnati Museum Center.


According to the band's website, Terminal Union is an "alt-country band showcasing true roots, folk, and Americana songwriting and musicianship."  Being primarily a hard rock guy, I'm somewhat new to this kind of music, but I have been pleasantly surprised by just how much I like this album.  Like any good album, it grows on you with each listen.

The best way I can describe TU's music is that it blends a retro, acoustic country sound (like something out of the 60's and 70's) with modern lyrics and themes.  The primary instruments are acoustic guitar, banjo, and piano, with occasional drums and harmonica thrown in.

If you like the dulcet sounds of 70's folk music (think early Jimmy Buffett sans beach setting) I think you'll like this album.

The album starts off with a solid number ironically titled Have Another Round, detailing the fatal shooting by Cincinnati police of a local musician who was armed with a knife.  "A 6-inch blade was all that they found/courtesy of the CPD/have another round."  This if followed up by Magnificent Sounds, a haunting, jazzy acoustic tune featuring solo trumpet that sounds like something you might hear from a street musician in New Orleans.

I Feel You is a great piano-based tune with powerful lyrics and a beautifully dark sound.  "It's okay to be afraid to die/I've been there before/you will rise up/and girl I feel you."  With its banjo riff and harmonica overlays, Things Left To Do might be an old Johnny Cash song, while Don't Tell Me showcases the band's melodic abilities with a fine duet on the chorus.

Perhaps the best song on the album is Comeback Kid.  This tune has all the earmarks of a great song, with meaningful lyrics set to music that fits the mood of the song perfectly.  "All I want to be is the comeback kid/forgive myself for everything I did."  The key change on the last chorus is chill-inducing.  This song really hits home because it touches on that oh-so-universal emotion of adulthood - regret and the desire to start over with a clean slate.

It's good enough to be worth a listen on YouTube.


"Making Arrangements" is available for download from both iTunes and Amazon's MP3 store.  I highly recommend it to anyone who likes mellow acoustic music with profound lyrics, unique voices, and top notch musicianship.
A Musing By Scott at 3:32 PM