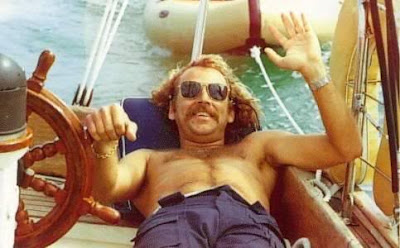 If you know anything about Buffett, it's that he fancies himself a comedian, working clever turns of phrase into his songs and occasionally coming up with funny song titles to go with it. This is, of course, a tradition in country music, and Buffett has always first and foremost been a musician out of the country-western tradition.

Not all of these songs are among his best tunes, but they are without question among his cleverest and, sometimes, surprising titles.

10. Trying to Reason With Hurricane Season

This is one of Buffett's better known songs, if only because it's on his seminal 1974 album A1A. If you haven't heard it before, it's worth a listen because not only does it have a clever title, but it's a fantastic song to boot.

This is from Buffett's pre-major label period. Recorded in 1971 as part of his second album on tiny Barnaby Records, neither the song nor the album was ever released because the sales of his first album with Barnaby were so poor. Barnaby actually claimed to have "lost" the master recordings when they explained to him why they weren't releasing the album. After he achieved mainstream success in the mid-1970s on a different label, Barnaby magically "found" the master tapes and finally released the album, to limited appeal, in 1976. After going out of print for years, most of the songs on the album (including this one) were released on a compilation CD in 1991 called Before the Beach. It's an apt title because these songs don't sound like anything Buffett did later. They are more like 60s folk rock songs.

In any case, God Don't Own a Car isn't a great Buffett song, but the title is eye-catching nonetheless.

This is a track from Buffett's most recent studio album, Songs from St. Somewhere. Like a lot of his recent music, this song is only okay. He definitely doesn't have the songwriting chops of his heyday, but that's okay. I still love everything he does and this song is clever if nothing else. It's about a circus performer who has died and whose widow is trying to sell the Cadillac that was an integral part of their life together.

7. It's Midnight and I'm Not Famous Yet

This is a song from the 1982 album Somewhere Over China. It's about a gambler in a casino trying to win it big with "one more bet."

This is a really good song from the 1985 album Last Mango in Paris (the title track, which follows this one on the album, was considered for this list, but didn't quite make the cut). This song is clearly based on Buffett's separation from his wife, which occurred in the early 1980s. They finally reconciled around 1987 and have been together ever since. He wrote a lot of break-up songs during that period.

5. What if the Hokey-Pokey is All it Really is About?

This is from 2002's Far Side of the World album. It's not one of my favorite Buffett songs. It's a song that gives one the impression that it began as a funny title - probably something that someone said while drunk - and then a song was built around it. This song has five songwriters credited, including Buffett, and I've found there is an inverse relationship between the number of songwriters on a Buffett song and how good the song is.

In any case, the title's still funny.

4. We are the People Our Parents Warned Us About

From Buffett's classic 1983 album One Particular Harbor, this is a great song that pokes fun at what the Baby Boomer generation was growing into in the early 1980s, and how that related to their parents' views on life in the 1950s.

3. Vampires, Mummies, and the Holy Ghost

Religion has long been a theme in Buffett's music, and this song, from 1994's Fruitcakes album, is no exception. Growing up Catholic (he was even an alter boy), Buffett jettisoned his religious trappings in adulthood and apparently never looked back, but his religious upbringing has influenced a lot of his lyrics.

This song is only okay, but the title is eye-catching and the lyrics discuss childhood fears that Buffett had - namely vampires, mummies, and the Holy Ghost. "These are the things that terrify me the most." Which is pretty funny.

2. The Weather Is Here, Wish You Were Beautiful

A classic Buffett title, this song comes from the Coconut Telegraph album of 1981. Like a lot of Buffett's tunes, it could easily be turned into a short story. It's about a New York businessman who runs away from his life and moves to the Caribbean, only to find that even paradise sucks after a while, and he ends up heading back home to his old life. Buffett has stated that he got the title from graffiti he saw in a bar bathroom.

1. My Head Hurts, My Feet Stink, and I Don't Love Jesus

Unquestionably Buffett's best song title, this one comes from 1976's Havana Daydreamin' album. The song is about a killer hangover and the title describes how Buffett feels about it. Humorously enough, the Oak Ridge Boys, of gospel music fame, sing back-up on this song, which has a real ragtime feel to it. They apparently were afraid their largely southern Christian audience wouldn't get the joke and asked not to be credited in the liner notes.

#6 and #2 have always been two of my favorite titles. Your commentary on #1 makes me laugh. I'm always entertained when people deny their own sense of humor for fear of eternal damnation. I think of this : Don't laugh at a joke involving God or Jesus, because you will grow hair on your tongue and everyone will know you've been naughty.

I'm positive that God's got a sense of humor so I think it's probably okay to laugh at sacrilegious jokes.