It's hot as hell and the air conditioning in my car is broken. I'm learning to live like it's the 1960s and air conditioning in cars isn't a thing.  It's fun rolling down the road with the windows all the way down, although I worry about getting a pebble in the eye or something when I'm on the Interstate. 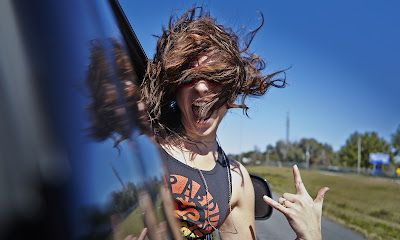 Thankfully, unlike the 1960s, the buildings and homes I go into after being in my car are always air conditioned, so at least I can cool off afterwards. But I've started carrying my scrub shirt to work (wearing only a T-shirt) and putting it on after I get there so that there are no visible sweat circles across my back and sides. I cannot IMAGINE what it must have been like when air conditioning didn't exist in cars OR buildings. Can you imagine going to work in a suit and tie (because that's what EVERYONE wore to work back then) AND not having air conditioning, either in your car OR your office? We are seriously spoiled these days, and you learn just how spoiled when your AC goes bad.

My piano playing is going really well. I recently read an old book from the 1940s about piano playing for the "amateur" and it has really inspired me to make some positive changes in my practice. I had felt like I was "plateauing" in my playing and this book has helped me to get out of that. I've started working to retain pieces after I finish them, and am even thinking about doing a "recital" on Instagram Live (not that I expect dozens of people to sit there and watch me play for however long, but I want to do it for myself).

In college, I was a music major until my Junior year, when I switched my major and minor. The main reason I did this was because I had gotten burned out with practicing and I was terrified of giving an hour-long senior recital. That's what you do in music instead of a senior thesis. My last semester of piano instruction was the first semester of Junior year, and I got an "Incomplete" for my grade that semester because I had basically stopped practicing. That Incomplete is still on my permanent record. I've always appreciated Mr. Tilford giving me that instead of an F, which is what I deserved.

I still have the sheet music for at least three pieces that I was supposed to be learning that semester. The first is a difficult Impromptu by Schubert that I made virtually no headway on that semester.  I completed it earlier this year, although it wasn't as perfect as I would have liked. The second is a well-known Rondo by Mozart that I had made some progress on in college but never came close to finishing (Melanie actually remembers me practicing this song way back when). The third is a Prelude by Bach. All of these pieces still have my instructor's chicken scratch all over them.

Although that Incomplete will remain on my permanent record, it has been important to me to finally "complete" the work I was supposed to learn during that last semester of my formal piano instruction. Once I've completed the Bach piece (which is almost done), I will be able to consider that class completed, even if it took me 22 years.

This is also why I want to do a recital on Instagram - a way of feeling like I have finally finished my abandoned degree in music. There was only one class I needed, plus a recital (and three more semesters of instruction), to finish that music degree. Obviously I'm not going to take the class. But by completing the recital, I'll feel like I've come pretty damn close to finishing what I abandoned in 1995.

Here is that second piece I mentioned. It's the Rondo in D Major by Mozart.