The Heavenly Messenger of 1006

The evening of April 30, 1006, would have started like any other spring evening in north-central Egypt. As the sun set, the mid-80 degree temperatures would have sluiced off like water down a drain, dropping quickly into the low- to mid-60’s. The setting sun would have illuminated the western sides of the Pyramids at Giza, casting them in a golden orange glow until the disc of the sun dropped below the horizon. The purple-blue sky would have quickly descended into a vast, moonless black. The moon’s last quarter had begun on April 23rd, and April 30th marked the night of the new moon. The stars that night would have shown like grains of sand on a beach, the stellar light added to only by cooking fires spread across the Muslim village of Cairo.

Abu’l Hasan Ali ibn Ridwan Al-Misri was roughly 10 or 11 years old on that moonless Egyptian night. Born near Giza, he was an exceptionally bright child, fascinated by the heavens, devoted to Allah, and interested in the workings of the human body. He would one day become a prominent physician and astronomer, writing commentaries on ancient Greek medical practices and engaging in lively polemics against a rival physician and thinker across the deserts in Baghdad.

But on this night, the night of April 30, 1006, Ali ibn Ridwan, as he was more commonly known, was still a curious and eager child, with the world at his doorstep. He must have stepped out of that doorstep on that fateful evening, perhaps to engage in a nightly routine of stargazing, or perhaps to perform some mundane household task. Whatever the reason, what he saw in the sky that night would remain in his mind forever.

As he gazed into the heavens on that dark, moonless night, he saw what astronomers now know was the brightest and most intense supernova ever witnessed and recorded by human beings.

Later in life, Ali ibn Ridwan would write that it was about three times the size and intensity of Venus (which was, and is, a very bright, prominent body in the night sky), and that the overall intensity was about one-quarter the brightness of a full moon. Indeed, it was so bright, it cast shadows on the ground, much like the moon can do on a clear night. A modern astronomer commenting on the event stated that it was probably so bright, one could likely have read a text or manuscript by its light.

Egyptians weren’t the only ones who witnessed this timeless stellar event. Benedictine monks in Switzerland wrote of the supernova, “in a wonderful manner this was sometimes contracted, sometimes diffused, and moreover sometimes extinguished.”

According to Chinese astrologers, who left the most detailed report of the event, the supernova was east of the constellation of Lupus, south of Di, and one degree west of Centaurus. These same astrologers claimed its brightness equaled half the intensity of the full moon.

The supernova remained visible in varying degrees of intensity throughout the summer, before disappearing in the fall. As the earth rotated, it became visible again in December, and appeared off and on for at least the next year and a half. A recently discovered Native American petroglyph from roughly the same era is believed to also record the event (see this CNN article.)

In 1965, astronomers verified the factuality of the various ancient texts when they first detected radio waves and X-rays emitting from the remnant of the explosion. It was long believed, based on the eyewitness reports, that the supernova of 1006 was a Type Ia explosion, meaning, among other things, that it lacked hydrogen. A Type Ia explosion had been suspected primarily based on the reports from the Swiss monks of the star’s tendency to change in intensity, diffuse, and disappear. Type Ia supernovae do not collapse into neutron stars or form black holes, and, verifying the initial suspicions about the nature of the 1006 supernova, no neutron star or black hole has ever been detected in the remnant.

The next time you casually step outside on a clear night and stare up into the sky, remember Ali ibn Ridwan, and marvel at the vastness and timeless beauty of the universe. 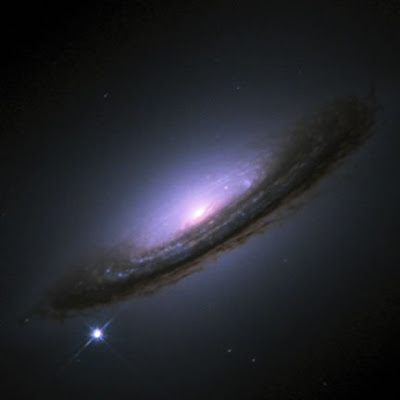 1066 is the year William the Conquerer invaded England. This supernova was in 1006.