Very little of note has been going on of late.  I've been thinking for a while about doing a post about Christmas - seems like I do one or two every year - but I can't really think of anything that I haven't already done somewhere, sometime before.  I had been thinking of doing a sort of reminiscent post about Christmas in my childhood, but when I started writing it, I decided it would be totally uninteresting to anyone but me and possibly my family.

The girls were off school today for a snow day, which happened to coincide with my day off (I work this weekend) so I've spent all day with the family, which is unusual on a Tuesday.  Working second shift, I don't typically see them at all during the week.  We drove around tonight looking at Christmas lights and the girls made cookies and brownies today.  Syd and I watched an episode of Lost, and I took pictures and videos while the girls played in the snow.

Back to work tomorrow and it will be the first day of a 9-day stretch for me.  I've been trying to tell myself not to focus on the fact that it's 9 days in a row because that will just make it worse.  The unfortunate thing is that this is pretty much going to be a regular thing for me because of the way the scheduling always pans out.  When I work a weekend, I pretty much end up with an obscenely long string of days.  In other three weeks, I've got an 8-day stretch.  I'm gonna have to talk to the boss about seeing if there's something we can do to solve this predicament.

My parents will be visiting for Christmas this weekend from Texas.  Unfortunately, I work all weekend so I won't get to see them very much.  But the kids will get to spend some time with them, so that's good.

Yes, I realize this is probably the dullest, most boring Notes ever.  Sorry about that, but I did kind of warn you at the beginning by saying that nothing has been going on lately.  I really meant it.

For a post that is WAY more entertaining, try this one from two years ago: Christmas with the Christmas Family, or this one from 2010 that features me in high indignation mode ranting about people who get offended by "Happy Holidays."

Or how about this Black Friday meme I made: 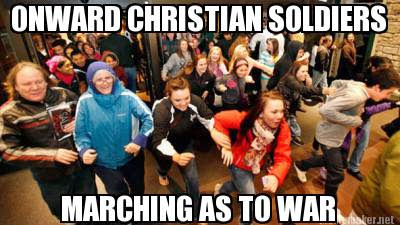 I've already finished over 40 books this year.  This will be the most I've finished since 2006.  If I can get through five or six more before the end of December, it could be the most ever, but I don't think I'll be able to finish more than two or three.  I'm currently reading the popular and, naturally, controversial book about the historical Jesus called "Zealot," by Reza Aslan.  I'm only on chapter two, but it is already shaping up to be a fantastic history book.  When I'm finished, I'll probably do a whole post on it, assuming it maintains the momentum it has started with.  I've read a lot of books about the historical Jesus, so it's been a nice surprise to discover a new one that actually keeps me highly engaged, even if most of the information is stuff I'm already familiar with.

Looking forward to your thoughts on Zealot.

Really enjoying it so far. Love the way he sets the historical context.