Tragedy in the Sierra Nevada, Part I

Buy this series for your Kindle reader from Amazon.com, only $1.99:


A more shocking scene cannot be imagined than that witnessed by the party of men who went to the relief of the unfortunate emigrants in the California Mountains. The bones of those who had died and been devoured by the miserable ones that still survived were lying around their tents and cabins. Bodies of men, women and children, with half the flesh torn from them, lay on every side.

On the morning of April 14th, 1846, three families from Springfield, Illinois trundled out of town in a train of nine wagons, following the California Trail. There were thirty-three people in all, including a number of teamsters hired to drive wagons and tend cattle. The group consisted of the brothers George and Jacob Donner and their families, along with the family of James Reed. Children accounted for nearly half of the thirty-three people in the group. One of those children, Virginia Reed, would later write:

Never can I forget the morning when we bade farewell to kindred and friends. The Donners were there, having driven in the evening before with their families, so that we might get an early start. 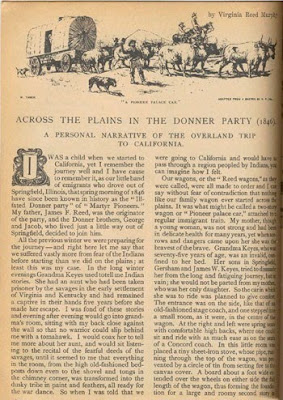 Not much is known about specific reasons why these families decided to head west, but the 1840’s were characterized by mass emigrations across the American frontier, and the Reed and Donner families no doubt had the same plans as the thousands of others who came before and after them: to find a better life in California.

Neither is much known about how the Donner families and the Reed family came to be traveling together. It has long been assumed that James Reed and George and/or Jacob Donner were friends, but there is nothing in the historical record to explicitly suggest this. Their decision to travel together may simply have been a practical one: safety in numbers.

Each of the three families took three wagons apiece – one for the family to live in, and two others loaded with provisions. These provisions would have included everything the family owned – clothes, blankets, dishes, pots and pans, toys, and six months’ worth of food – enough to get them to California. Virginia Reed mentioned that one of the Reed wagons even contained a brand new wood-burning stove. Additionally, each wagon was pulled by six to eight oxen, meaning there was a herd of over sixty animals.

The first leg of the journey brought the wagon train to Independence, Missouri, where they met up with a much larger group headed by Lexington, Kentucky native William Henry Russell. The Reeds and Donners attached themselves to this group. The Russell Party may have included as many as 1500 emigrants. They set out on the California Trail in about 250 wagons on May 12th, 1846.

“I am afraid your mother will not stand it many weeks, or indeed days, if there is not a quick change.”

James Reed wrote those words to his brother-in-law on May 20th, 1846, about a week or so before she died. Virginia Reed later wrote that her grandmother had been very ill before making the journey, and her other children encouraged her to remain in Illinois, but she was determined to see California before she died.

Sarah Keyes was buried with a short ceremony in Alcove Springs, and one of the teamsters – an Englishman named John Denton – carved a small gravestone for her.

A Kentuckian of Russell’s party, Edwin Bryant, wrote the following:

At 2 o’clock, p.m., a funeral procession was formed, in which nearly every man, woman, and child of the company united, and the corpse of the deceased lady was conveyed to its last resting place, in this desolate but beautiful wilderness…the grave was then closed and carefully sodded with the green turf of the prairie, from whence annually will spring and bloom its brilliant and many-colored flowers.

The wagon train of the Russell Party continued slowly across Kansas and Nebraska, following the Platte River. Around June 26th, the company arrived in Fort Laramie, in the southeastern corner of Wyoming. George Donner wrote in a letter home:

We arrived here yesterday without meeting any serious accident. Our company are in good health…Our provisions are in good order, and we feel satisfied with our preparations for the trip.

For some time, Reed had been discussing with the Donner brothers the possibility of taking an alternate route to California. Normally, the California Trail headed northward into Idaho, then back towards the southwest, through Nevada and into California. The previous year, however, a pioneer named Lansford Hastings had written a book about emigrations to Oregon and California, wherein he suggested an alternate route: cutting southward around the Great Salt Lake (through present day Salt Lake City), and reconnecting with the California Trail in Nevada. 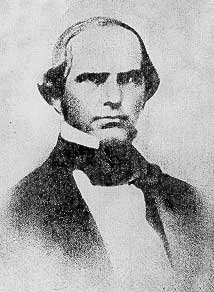 This became known as the Hastings Cutoff, and was believed to save some 300 miles – perhaps a month of traveling – over the normal route.

While in Fort Laramie, Reed and the Donner brothers met up with an acquaintance named James Clyman, who had just returned from California. He had traveled there earlier in the year with Lansford Hastings, and they had used Hastings’ proposed southern shortcut. Clyman advised Reed and the Donners not to use it, as it had proven to be fraught with difficulties and long desert stretches with little or no water.

The wagon train continued westward from Fort Laramie, reaching the Great Divide around the middle of July. Charles Stanton, a bachelor from Chicago who had joined up with the Donners in Missouri, wrote:

Dreams of my youth and of my riper years is accomplished. I have seen the Rocky Mountains – have crossed the Rubicon, an am now on the waters that flow to the Pacific! Should the remainder of my journey be as interesting, I shall be abundantly repaid for the toils and hardships of this arduous trip. 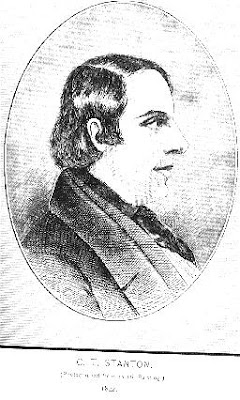 By the time the party reached Fort Bridger, in southwest Wyoming, Reed and the Donner brothers had decided to take the Hastings Cutoff, despite the warnings against it. Several other groups from the Russell Party had already taken the Cutoff, leading Reed to believe that a nice road would be opened for them. These travelers, numbering as many as sixty wagons, were being led by Hastings himself. Reed wrote:

Mr. Bridger informs me that the route we design to take is a fine level road, with plenty of water and grass…It is estimated that 700 miles will take us to Capt. Suter’s Fort, which we hope to make in seven weeks from this day.

Captain “Suter’s” Fort is a reference to John Sutter, already famous in California in the mid-1840’s, but destined to become famous across the country in 1848 when gold was discovered at his mill. Sutter’s Fort, located in modern day Sacramento, marked the end of the California Trail. Reed expected to reach it by the end of September. 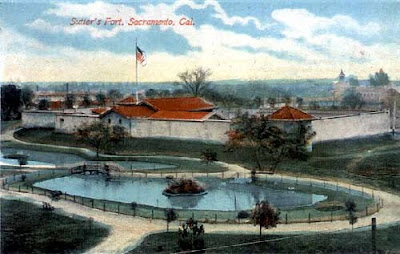 His only concern was a waterless stretch of about forty miles along the shortcut through the desert. He seemed certain, however, that water would be found by the dozens of wagons that were already ahead of him on the trail. He wrote: “Hastings and his party are out ahead examining for water, or for a route to avoid this stretch.”

On July 31st, a group lead by Reed and the Donner brothers, and now including a number of other folks who had joined them from the original Russell Party, headed south, following the Hastings Cutoff. Among the people joining the caravan were families by the name of McCutchen, Keseberg, Murphy, and Breen. There were about seventy-five people in all, inside twenty wagons, and they had elected George Donner as the captain of the expedition.

Thus, it was in Fort Bridger, at the Little Sandy River, at the end of July, 1846, that the Donner Party was officially established.

However, this narrative makes me feel slightly different about playing that old computer game Oregon Trail! How come in that game you never end up eating your fellow trail riders?

Well, that was the Oregon Trail. Donner Party was California Trail :)

Some of the places you are talking about, the forts and such, are stops on the Oregan Trail game I have on my phone though. And your people do get sick and die if you don't have enough food. But there isn't an option to eat them. LOL!
~Elissa

My only negative comment about this terrible story is its price.. Its not worth 99cents..... Its worth alot more 😁 Absolutely amazing read, and now I'm late for work, couldn't put it down..thanks

Thanks so much, SiCoope. Very glad you liked it. A review on the book's Amazon page would be much appreciated :) Thanks again for reading.

I am reading "Ordeal By Hunger", original copyright 1936. This account is a good complementary read and explains some things I was not clear on.