Antonio died first, followed by Franklin Graves, patriarch of the Graves clan. The next day Patrick Dolan died, after throwing off his clothes in delirium and running into the snow. He was dragged back into the shelter, but died shortly thereafter. Twelve-year-old Lemuel Murphy, whose younger brother had returned to Truckee Lake on the first day, died a few hours later, also in a delirium.

In later years, the daughters of Franklin Graves claimed that he called them to his side before dying, encouraging them to do whatever was necessary to stay alive. The clear implication was that he gave them his blessing to cannibalize him. This may or may not be a true story; it certainly is easy to imagine the members of the party rationalizing their difficult decisions later. On the other hand, several accounts suggest that cannibalization was discussed before any of the Forlorn Hope had actually died: William Eddy claimed that he had suggested a duel, with the loser being cannibalized; but it was ultimately decided to let nature take its course.

Whatever the case, with four of their party now dead beside them, the remaining ten people were faced with an unthinkable decision: cannibalize or die.

Many people offhandedly suggest that if faced with having to eat another human, they’d choose starvation. I would gently point out that this is easy to say from the relative safety, comfort, and warmth of one’s own home.

Stranded there in the wilderness in what has come to be known as the Camp of Death, starving and with no hope of food, the remaining members of the Forlorn Hope cannibalized their dead comrades.

Back at the lake camp, Charley Burger, who had turned back with William Murphy from the Forlorn Hope expedition, died after falling ill. Desperation had not quite reached a fever pitch for the members of the Donner Party still in camp at Truckee Lake and Alder Creek, and Burger was buried as Baylis Williams had been several weeks earlier.

On New Year’s Eve, after writing a prayer for better fortune in the coming year, Patrick Breen wrote: “Looks like another snow storm. Snow storms are dreadful to us. Snow very deep. Crust on the snow.” 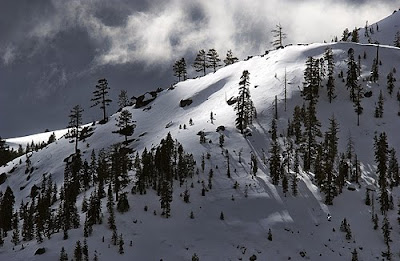 A storm brewing over Donner Pass

As the new year began, the Forlorn Hope made their way gradually out of the mountains, while the emigrants at Truckee Lake and Alder Creek slowly starved to death. On January 1st, Breen wrote: “Provisions getting scant,” and on January 3rd, “Provisions scarce.”

The next day, January 4th, Mrs. Reed set out with her daughter Virginia – then thirteen years old – to attempt a mountain crossing. They were joined by the Reed family teamster, Milt Elliot, and their maidservant, Eliza Williams (whose brother, Baylis, had died in December). The remaining Reed children were left in the care of others. The group lasted four or five days in the wilderness before returning, defeated but still alive.

On the same day Mrs. Reed and her group set out from the lake camp, the Forlorn Hope party finished the last of their human provisions, and began discussing the dire option of shooting their Indian guides for food. This was understandably met with much resistance by several members of the party, and William Eddy later stated that he warned the two men – Luis and Salvadore – about what the others were discussing. After darkness fell, the two Indians fled.

The Forlorn Hope followed their footprints the next day, and William Eddy succeeded in finding and killing a deer. The party, however, became separated during the day, with Eddy and Mary Graves out with the deer carcass in what was probably the Bear River Valley, the main group some distance back at the top of the ridge above the valley, and Jay and Sarah Fosdick back about a mile further yet. Jay Fosdick was on his last leg, and his wife had stayed behind to assist him.

The following morning, Eddy and Mary Graves dragged the deer carcass back to the others waiting on the ridge, and a small group went back to check on Jay and Sarah Fosdick. Jay had died in the night, and although they had a fresh deer carcass, they recognized that it would not last long. So, according to one early biographer, “the flesh was taken from the bones of poor Fosdick, and brought into camp.”

Another writer, Quinn Thornton, working from the stories of William Eddy, and widely acknowledged to have intentionally sensationalized the unspeakable horrors encountered by the Donner Party, wrote the account like this:

One of the emigrants, believing that Mr. and Mrs. Fosdick had died during the previous night, sent a person back to the place, with instructions to get Mr. Fosdick’s heart for breakfast…[After meeting Mrs. Fosdick on the way,] two individuals accompanied her [back to her husband’s corpse], and notwithstanding the remonstrances, entreaties, and tears of the affected widow, cut out the heart and liver, and severed the arms and legs of her departed husband.

These sorts of stories, told in the 19th century, no doubt contributed to the grisly image people to this day associate with the Donners. It seems to matter very little that it was sensationalism at best, and outright lies at worst.

Back at the lake camp, Mrs. Reed and her companions returned during the day of January 7th. According to a letter Virginia Reed wrote later that year, their decision to return was providential, because that night the camp was hit with “the worst storme [sic] we had that winter.” From other existing accounts, it seems to have been raining and sleeting throughout many of the days during the early part of January, and freezing hard at night, and the storm Virginia refers to actually hit several days later. By that time, emigrants at Truckee Lake and Alder Creek were able to move about only by tunneling through the snow. The doors and windows of the cabins and shelters had long since been covered over by snow and ice. 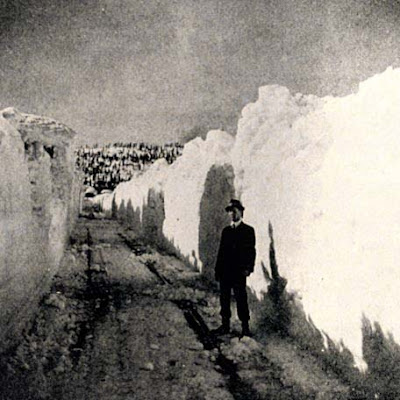 On January 8th, Patrick Breen recorded the return of Mrs. Reed and her group, then commented rather stoically: “Prospects dull.” He also commented that by this time, the Reeds had nothing but “hides” to live on.

He was referring, of course, to animal hides. The emigrants had used hides to cover the roofs of their cabins. With nothing left to eat, they took the hides and boiled them, boiling out what little fat and protein were left in the skin. This would congeal at the top of the water, and the jelly-like substance could be scooped off and eaten. According to Virginia Reed, writing as an adult: “When prepared for cooking and boiled they were simply a pot of glue.”

Cannibalism couldn’t possibly be much worse than that. They were literally eating leather.

In the aforementioned letter of May, 1847, the teenage Virginia Reed wrote: “We had nothing to eat but ox hides…we had to kill little Cash the dog and eat him. We ate his head and feet and hide and everything about him.”
Read Part VII
A Musing By Scott at 11:35 PM

We don't feel guilty about killing animals to eat, because animals can't avenge their relatives and conscience or guilt is fear of punishement or revenge. We feel guilty about killing or eating people because "society" can come after us and we superstitiously think it's God. Perhaps there would be fewer evil people if we were not so reticent to kill and eat our own specie.